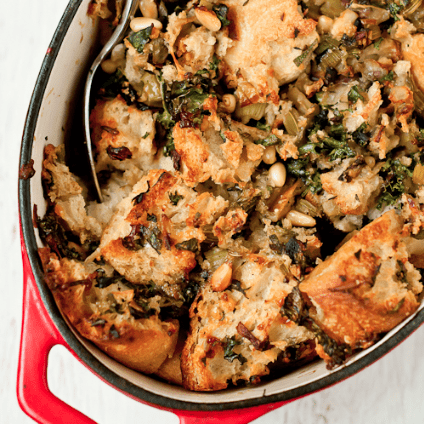 I promised you recipes for Thanksgiving and I’m going to make good on that promise! 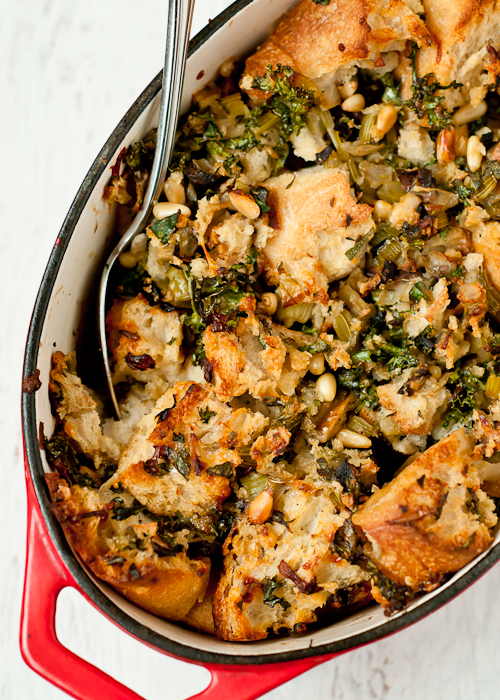 I started saving bread for stuffing months ago.  I don’t like to use fluffy white or faux-wheat bread that come in long, square loaves in uniform slices perfectly lined up in twisty-tied plastic bags.  No.  That won’t do for stuffing.  You’ve got to use something flavorful and substantial.  I have use homemade bread in the past, but it can get gummy.  Instead I like to buy day-old artisan bread, rip it or slice it into big pieces and then let it air dry.  Of course, I live in a dry climate, so if you live where it’s more humid, you’ll want to dry it out in the oven.

I love Crumb Bros artisan bread from Logan, UT.  Whenever I pop into Caputo’s I pick up a loaf or two.  For this stuffing I used a little more than half of a ciabatta loaf and one whole herbed baguette. 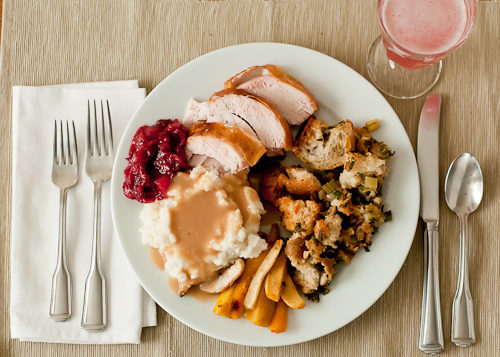 I didn’t try any (sob) but my husband said it was stellar.  And I made enough for a small army, so he’s been eating it for quite a few meals…ahem.  It smelled amazing and I could have eaten the onions, celery, and kale on its own with the pine nuts and cheese.  Whoa.  There is so much flavor in this stuffing. I’ve finally perfected my  Gluten-Free Cornbread Stuffing, so that’s a good stand in for the moment.

Place the bread cubes in a very large bowl and set aside until ready to use.

Place the dried mushrooms in a medium bowl and cover with very hot water.  Let stand for about 10-15 minutes to rehydrate.  Drain and finely chop.

Meanwhile, heat a large skillet over medium-high heat.  Add the onions and celery.  Cook, stirring occasionally, until they start to soften and the onions turn translucent.  Add the mushrooms and garlic and continue cooking until the garlic starts to turn golden.  Add the kale and cook until it starts to wilt, but stays bright green.  Add the fresh herbs and cook for a minute or two longer.  Remove from heat and let cool a bit, then add to the bowl with the bread crumbs, along with the pine nuts and cheese.

In another bowl, whisk the eggs and stock together with the salt, pepper, and nutmeg if using.  Pour over the bread cubes and vegetables.  Toss to coat.  Let stand until most of the liquid has been absorbed.  Stir several times for even absorption.

Butter a large, shallow casserole dish, or two smaller dishes.  (I used a 2 quart enameled cast iron casserole pan and an 8″ square glass baking pan.)  Transfer the stuffing to the baking dishes and bake for about 30 minutes, or until the top is golden brown and the stuffing has cooked through.  (You could test it with an instant-read thermometer or poke into the center with a fork and see if steam escapes and it no longer looks raw.)

Makes enough for a crowd, probably 10-12 servings or more.

*When the bread was completely dried out, it weighed 1 lb. even.  I’m guessing it lost a little weight as it dried out.

p.s.  Need a little help feeling brave enough to tackle a Thanksgiving turkey?  I’ve got you covered with 7 Secrets To The Juiciest Thanksgiving Turkey. 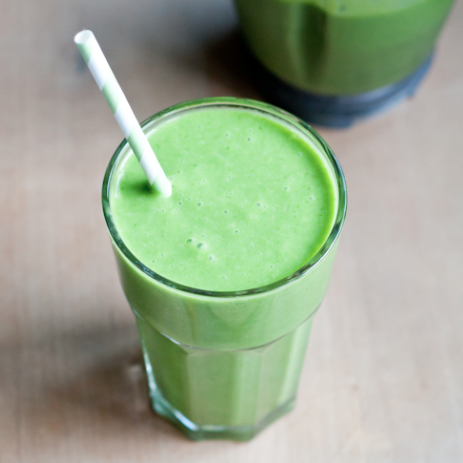 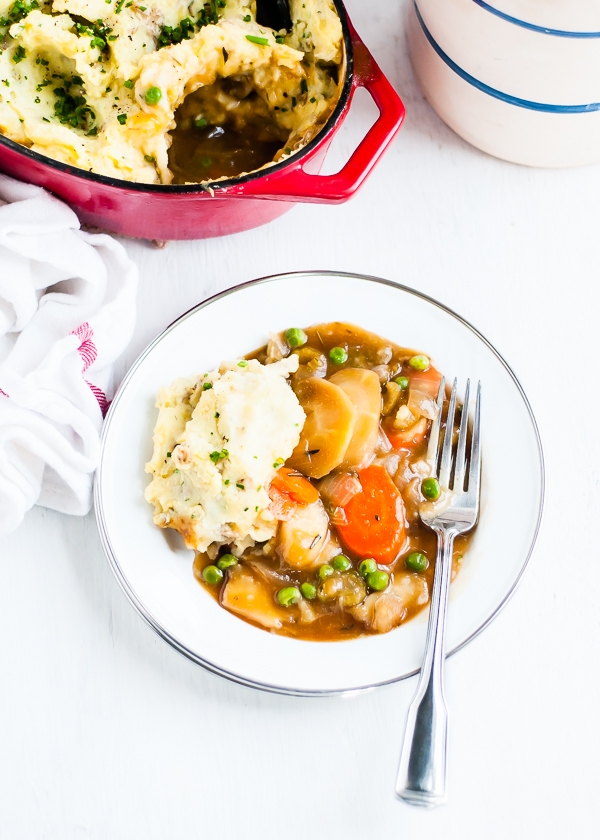