I had grand plans of using a bar of Amano chocolate to make gluten-free, dairy-free molten chocolate cakes for Valentine’s Day. I haven’t given up on that idea. I’ve been saving that bar of fancy chocolate for months. 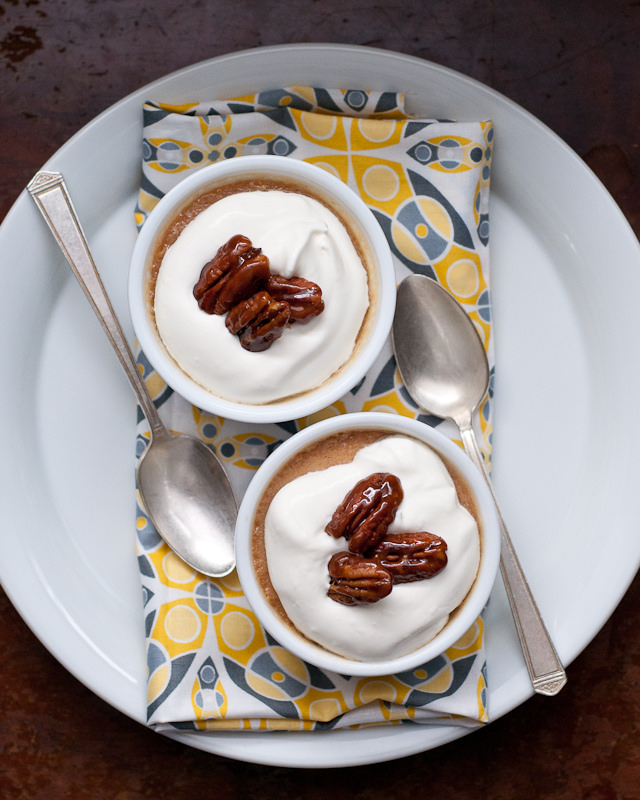 But I was rather in the mood for caramel, I decided. Something with caramel and nuts. And because it was Valentine’s Day, I was willing to cheat a little and enjoy some heavy cream and eggs in the form of a custard. Cute little pots de creme, to be specific.  And I say “pots de creme” instead of “pot de creme” because my husband and I didn’t share with the kids.  We ate them all by ourselves (except for two that we shared with some neighbors I took dinner to).  Mwahahahaha! 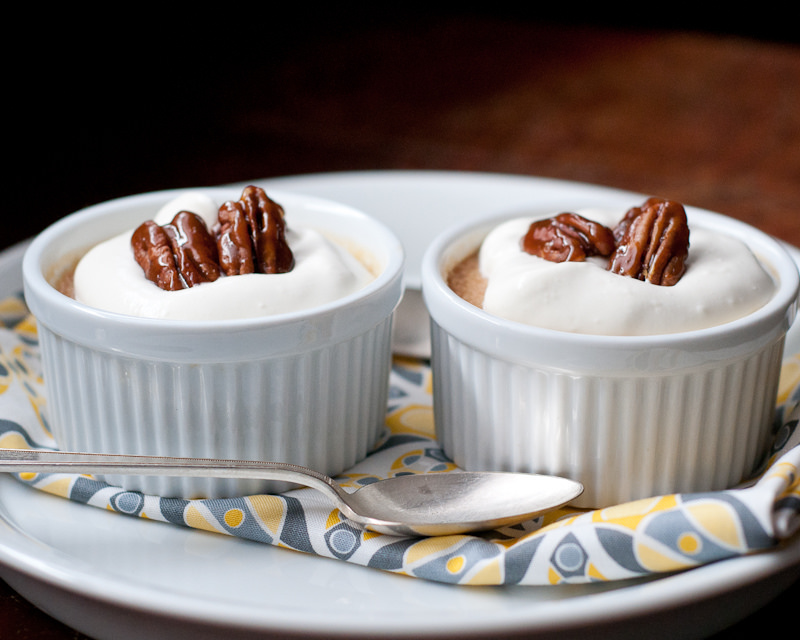 I can’t think of a proper way to describe how much I love pot de creme.  It took me a good long time to decide I liked custard in any shape and form.  It’s going to take a long time for me to get over them–if I ever do. 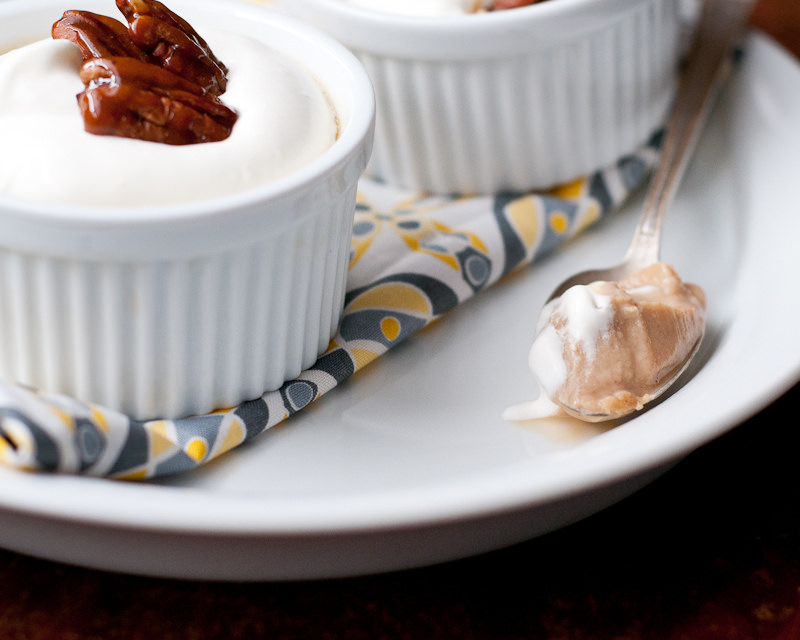 I chopped up some pecans and cooked them in butter until they and the butter turned brown.  I added just the right amount of sugar, let it caramelize.  And then came the cream and milk.  I let those tasty, sweet pecans bathe in their glorious, rich bath for awhile.  Man, was it hard to resist drinking that caramely concoction. 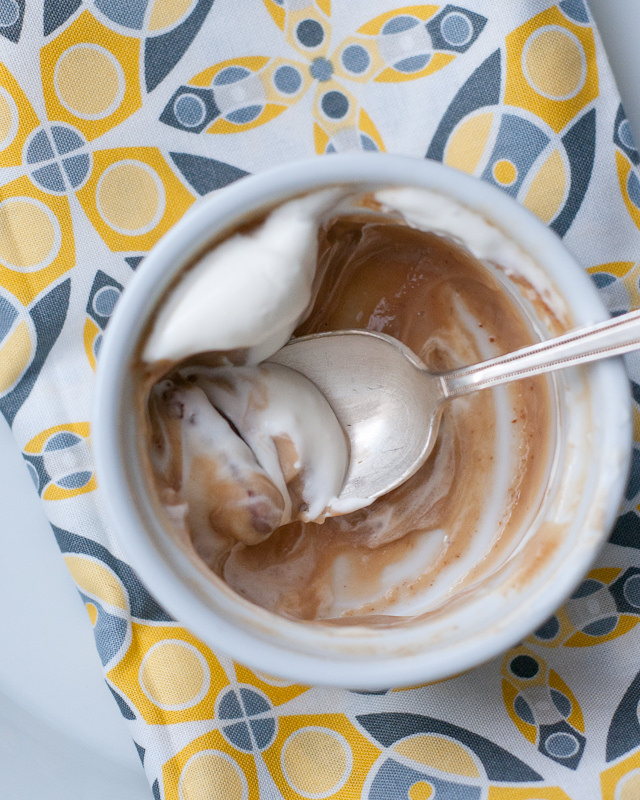 Waiting was so hard. SO hard. Not the kind of hard it was to wait for the squash I had for lunch the other day. The kind of hard where I debated whether or not to eat them warm out of the water bath they’d been cooking gently in for an hour. Did I want to risk the burns in my mouth and throat?

Yes, I tend to be a little dramatic about food. I know I use words like awesome, delicious and amazing too often (and also parentheses), but dangjiggity, these custards are that good. Oh, yes they are. Don’t take my word for it. Make them for yourself. And while you’re at it, make a double batch because I think you’ll want to.

Instructions:
Melt the the butter in a heavy-bottomed 2-3 quart pan.  Add the pecans and salt.  Stir constantly to toast the pecans until the butter browns.  Add 1/2 cup of the granulated sugar.  Keep cooking as sugar melts and turns to caramel.  Once the caramel turns a deep amber color (and before the pecans burn), add the heavy cream.  It will bubble up quite a bit, lower the heat and continue stirring.  Add the milk.  Allow the mixture to come to a low simmer, scraping up any hard bits of caramel, and remove from heat.  Let steep for at least 30 minutes, or longer for better flavor.

In a medium bowl, whisk egg yolks and remaining 1/4 cup granulated sugar until very thick and light in color.  Bring back to a low simmer, being careful not to let it boil, and drizzle the hot mixture carefully into the egg yolks in a steady, slow stream.  Strain the entire mixture to remove pecans.  Pour into 4 oz. ramekins or custard cups.  Skim any foam off the surface.  Bake at 300 degrees F. in a water bath for about 60 minutes. (Check after 45 minutes. The centers should wiggle a little, but not be set.)

Remove carefully from the water bath and allow to cool slightly before placing in the refrigerator to chill.  Serve cold with a dollop of whipped cream and a few candied pecans. 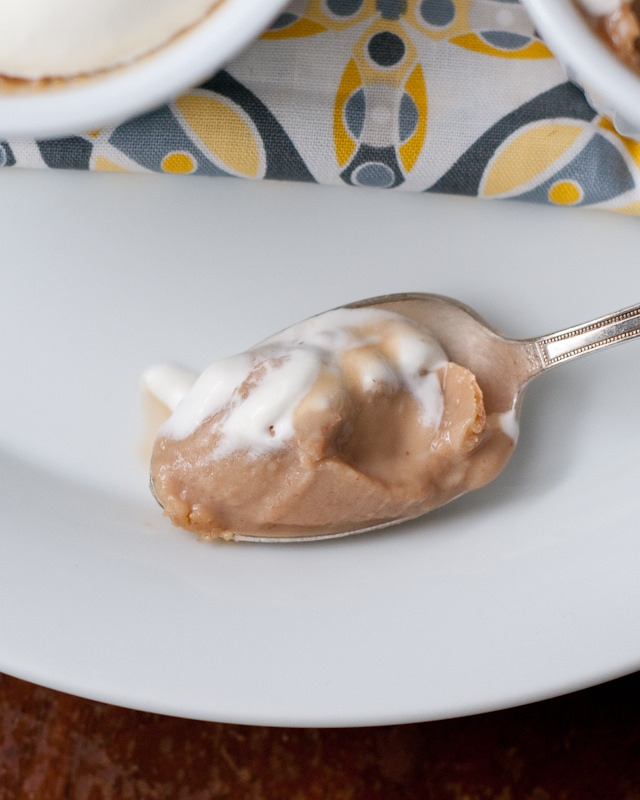 p.s.  Don’t you think that fabric is darling?  I got it in my Alt gift box.

What did you end up making for Valentine’s Day?  I must know. 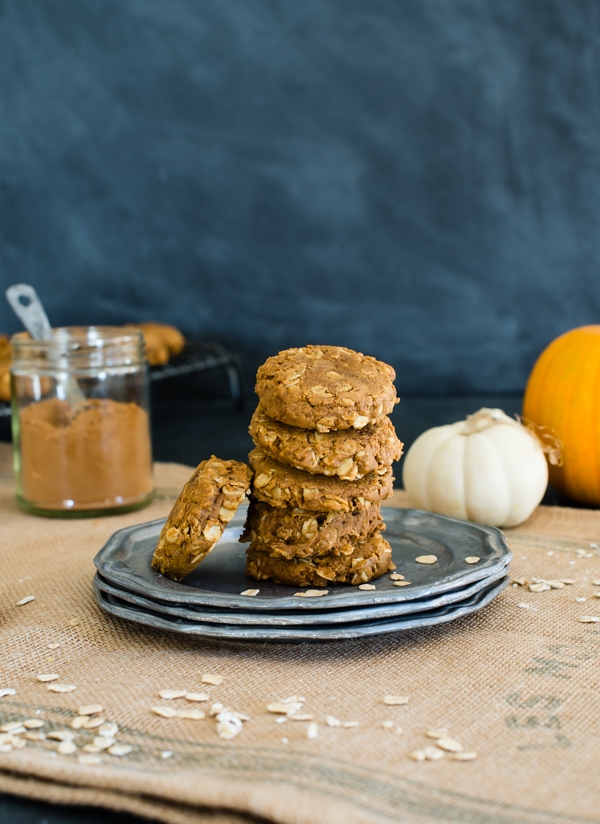