Hello again, dear friends.  I’m so happy to be back and I thank all of you for your kind comments and e-mails welcoming me back.

Thanksgiving Day happened to be Aunt Khalie’s birthday.  I simply had to make her a cake to go along with all that pie on the menu.

I went with Dorie Greenspan’s French Yogurt Cake for several reasons.  First, it’s incredibly delicious.  Second, it’s my go-to cake.  Third, it is easy to make and easy to alter depending on the occasion.  (This is a great article about Dorie’s cake including tips and the original recipe.) 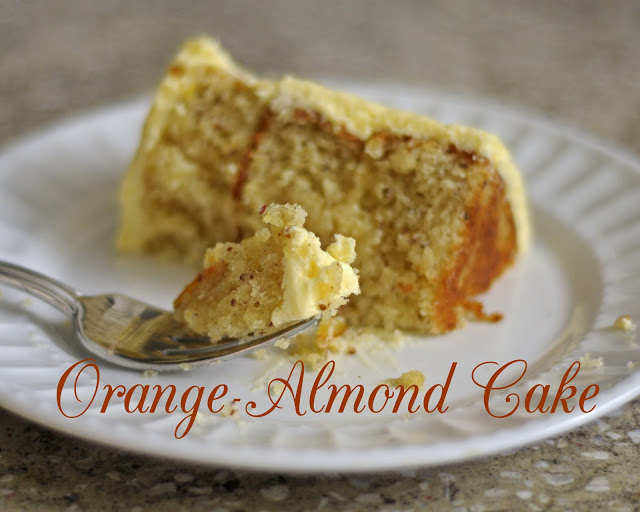 I doubled the recipe and used three, round 9″ cake pans.  The cake is filled with orange-elderflower marmalade (from IKEA) and frosted with a traditional French Buttercream flavored with Grand Marnier.

Forgive the lack of pictures.  There was so little leftover cake.  I’m sure you understand.  What with the delicate almond cake and creamy, rich buttercream–can you blame us for licking the platter clean?

One quick thing–this cake would be great for a Christmas party.  You can totally play around with the flavors if you wanted.  You could could add some spices–cinnamon, cardamom, and/or a pinch of cloves would be fab.  You could serve it sans frosting but with a dollop of whipped cream instead.  There are so many things you could do here.  Bittersweet chocolate ganache glaze…or milk chocolate.  Mmm.  Go crazy and then tell me all about it so I can try it.

Orange Almond Cake with Grand Marnier Buttercream
slightly adapted from Dorie Greenspan’s Baking:  From My Home to Yours

For the filling:
Juice of 1 orange
1/4 cup granulated sugar
1 Tbsp. Grand Marnier
1/2-1 cup sweet orange marmalade (I used the one from IKEA with elderflower in it)

For the Grand Marnier French Buttercream:

Preheat oven to 350 degrees F.  Butter and flour three, round 9″ by 2″ cake pans, line the bottom with a parchment or waxed paper round.  Set aside.

In a medium bowl, whisk the flour, ground almonds, baking powder and salt.  Set aside.

Place the granulated sugar and orange zest in a large bowl.  Rub the zest and sugar together with your fingertips until the sugar is damp and aromatic.  Add the yogurt, eggs, vanilla and almond extract whisking vigorously until the mixture is very well blended. While whisking, add the dry ingredients, then switch to a large rubber spatula and fold in the oil.  (Actually, I always forget to add the oil at the end and toss it in at the same time as the yogurt and eggs.  It always turns out fine.)

Divide the batter evenly between the three pans–each will get roughly 2 cups of batter.  Spread evenly in the pans and place in the oven.  Bake for about 30 minutes, or until nicely golden and a toothpick comes out clean when inserted into the center.

Remove from oven and place on a cooling rack for 10 minutes before carefully removing cakes from the pans to finish cooling.

When the cakes are cool, carefully trim the tops of each cake so they are flat.  (My cakes always seem to fall a little in the center now that I live at a high altitude.)

For filling:
In a very small saucepan, stir together the orange juice, sugar and Grand Marnier.  Bring to a simmer and stir to dissolve the sugar.  Remove from heat and let cool.  (It should remain a thin syrup.)  This will be the soaking syrup that will be brushed on each layer as the cake is assembled.

Stir the marmalade a bit to loosen it.  (Do not add water to thin it out.)  Set aside until ready to assemble cake.

In the bowl of a stand mixer, beat the egg yolks on high until thick and pale.  In the meantime, cook the sugar and water in a saucepan until it is 238 degrees F on a candy thermometer.  Just before the syrup comes up to temperature, turn the mixer on.  With the mixer running, drizzle the syrup down the side of the bowl.  When all the syrup has been added, beat on high speed until it reaches room temperature.
Turn the mixer down to medium-high speed and add the butter one tablespoon at a time.  Once all the butter has been added, turn the mixer back up to high and beat until the buttercream is smooth, creamy and no longer looks curdled.  (Keep beating if it does look curdled.  It will come together–I promise.)  Add the Grand Marnier and beat a little longer.  Set aside until ready to use.  Chill it will be longer than 30 minutes.  (You might end up with a puddle if your kitchen is hot.  Also, it’s got eggs in it.  Be careful not to let it sit out too long.)
Note:  You can make this ahead of time and refrigerate it tightly covered for a week or so, or freeze for a month or so.  It will need to come to room temperature and be beaten again to restore the proper texture.

To assemble:
Place one of the cake layers on a cake plate or serving platter.  Brush the entire layer with a bit of the orange syrup.  Let it soak in for a few minutes.  Spread a few tablespoons of the buttercream thinly over the cake.  Top with a modest amount of orange marmalade (1/4 to 1/2 cup) leaving about 1/2″ border around the edge.  Top with the second layer and repeat with orange syrup, buttercream and marmalade.  Discard any unused orange syrup.  Place third layer on top.

Apply a thin layer of the buttercream to create a crumb coating.  Chill for 15 minutes or so.  Apply the remaining buttercream and decorate as desired.

Chill until ready to serve.  Before serving allow the cake to sit at room temperature for about 15 minutes to allow the buttercream to soften a bit.  (It just tastes a bit better at room temp, but it’s fine if you serve it ice cold too.) 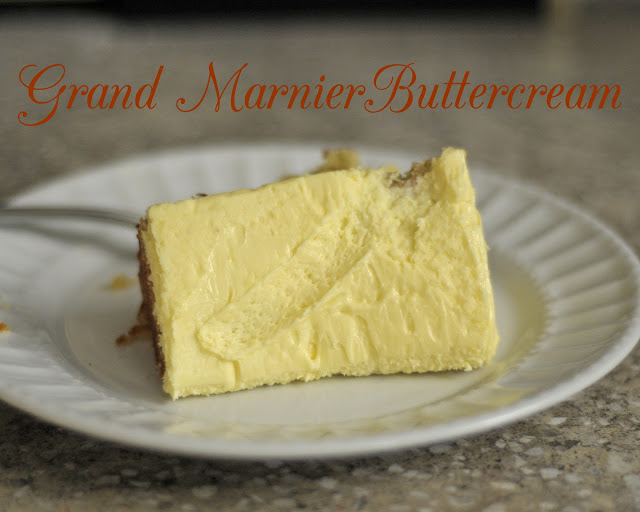