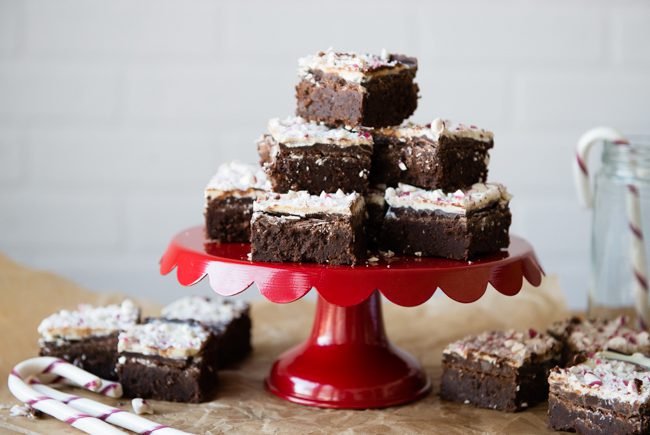 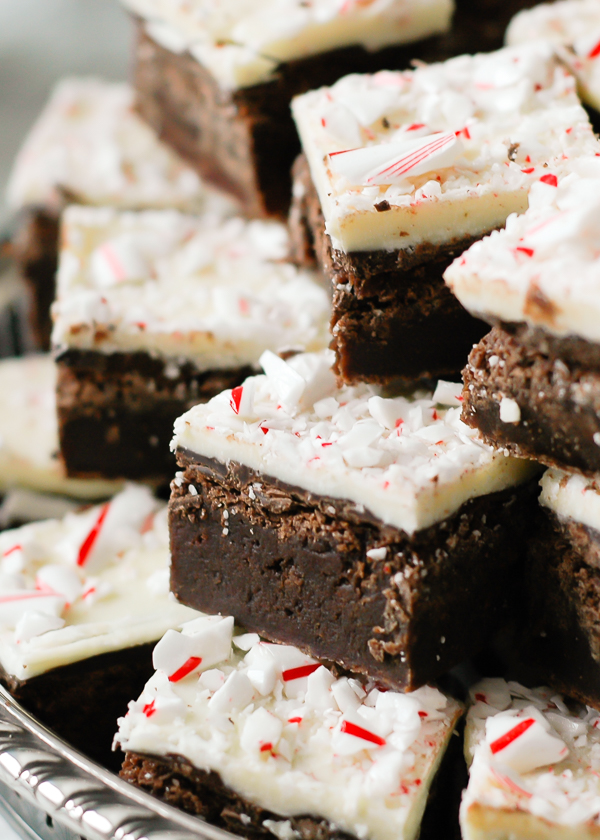 Peppermint Bark Brownies have one of my most asked for and popular recipes. People love these!

The idea for Peppermint Bark Brownies came from my friend, Tania, who brought me brownies topped with a layer of melted (and cooled) Andes Mints when I had my second baby. The following Christmas, after making her brownies several times, I decided to try to make brownies with peppermint bark on top instead.

They were a hit–both at home and with friends. So I kept on making them.

Now, when I post recipes on this blog, they are either old family recipes that are tried and true, or new recipes I’ve found and have to share with the world. (It’s my duty.)

Sometimes the translation of some of those recipes doesn’t work out. Sometimes my friends (this means you, too) have trouble with a recipe. Or it fails miserably. And I take full responsibility for that. Sometimes I even shed tears. (Well, not really, but I could and should.)

I feel horrible when a recipe fails one of my readers and friends. In the case of these brownies, several of you have e-mailed me or commented with questions. I’m very sorry for the trouble and hope this post helps!

I decided to do a how-to series for these and include hints I’ve found helpful as I keep making them. The recipe itself is posted below with better pictures (or you can click here).

Corinne asked me about the importance of using white chocolate chips over white vanilla-flavored chips.

There is a BIG difference between white chocolate chips and vanilla chips.

White chocolate contains cocoa butter, which is what is left over after cocoa beans are processed into cocoa powder. 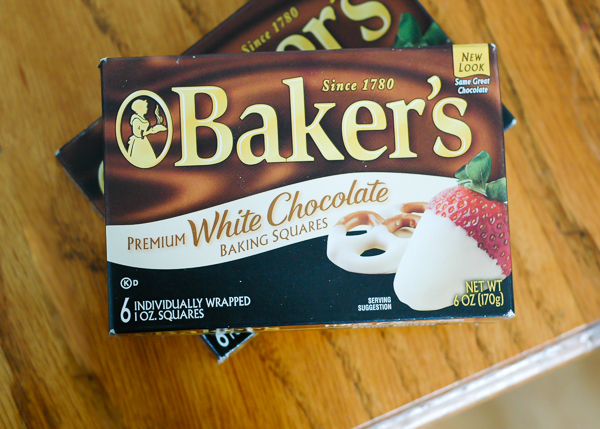 White chocolate is ivory; vanilla chips are white. White chocolate has a very rich, buttery mouth feel that cannot be duplicated in the vanilla chips. True white chocolate behaves differently because of the cocoa butter. It melts better. And I think it’s a bit easier to work with. It also tastes so much better.

Vanilla chips often contain palm kernal oil and milk powder, and no cocoa butter whatsoever. You can use them interchangeably with white chocolate chips sometimes, but not all the time. They keep their shape really well when used in cookies, but I’ve found they can become brittle after they’ve been melted. The same with almond bark.

(Can you tell which product I prefer over the other??? I really am a snob, right?)

I’ve made the Peppermint Bark Brownies three times in the past two weeks. The first two times I used white almond bark (on accident–I thought I was buying a block of white chocolate) and vanilla chips the second time.

Here’s what I found to be true–and I wish I had the pictures to prove it.

I melted the almond bark because I didn’t want to chop it up and use it like I was used to using the true white chocolate chips. I didn’t know what would happen. As it turned out, I had to add a bit of vegetable shortening to it to even out the texture. I spread the melted almond bark on top of the brownies and then topped with chocolate chips. They melted from the residual heat. When they set up and I got ready to cut them, the tops broke up. The taste wasn’t as great as with real white chocolate either. I was thoroughly disappointed.

The white chips behaved fine, except that the texture was very brittle. I let them melt on the tops of the hot brownies. When I cut into the finished brownies, the tops also fell apart and I had to piece them back together.

This last time was better. I melted the Baker’s white chocolate instead of chopping it up and sprinkling it over the top. This was mostly for aesthetic purposes. By the way–Trader Joe’s is about the only place I know of that carries TRUE white chocolate chips. Not even Ghirardelli chips are true white chocolate. (If you know of anywhere else or another brand that is–DO TELL. I’d love to know.) 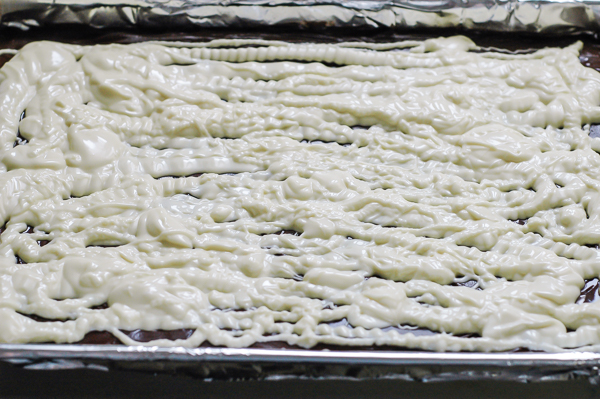 I proceeded with the recipe as I wrote it two years ago (click here to read the original recipe), except that I drizzled the melted the white chocolate on top of the melted semi-sweet chocolate chips.

The flavor difference, in my opinion, was marked. The flavor was much better. The white chocolate melted and spread better. The brownies cut better with less of the tops falling apart–just a few bits off the edges.

To sum up about the white chocolate–

If it matters to you, go with the real stuff. I think it tastes better and is worth the extra expense. If it doesn’t matter, then use the vanilla chips. (I’ll try not to judge you–just kidding.) But don’t use the almond bark for this recipe. Save it for another use.

I went back and looked at my recipe.

I think this is where I apologize that all ovens are not created equal and that I often have written recipes according to how my oven works. (Or used to work, as was the case with my previous oven.) And also for not being so clear in the recipe.

Let me offer some new advice and hints. (I will go back and modify the recipe to reflect the changes.)

**Go with your favorite brownie recipe that you are familiar with. Or (gulp) use a mix if you are more comfortable with that. Now isn’t the time to try a new recipe unless you are brave. Different recipes behave differently. I believe this recipe is best with a thick, extra chocolatey brownie. BUT–I’m sure it will work with whichever brownie you like the best.

**LINE THE PAN WITH FOIL. 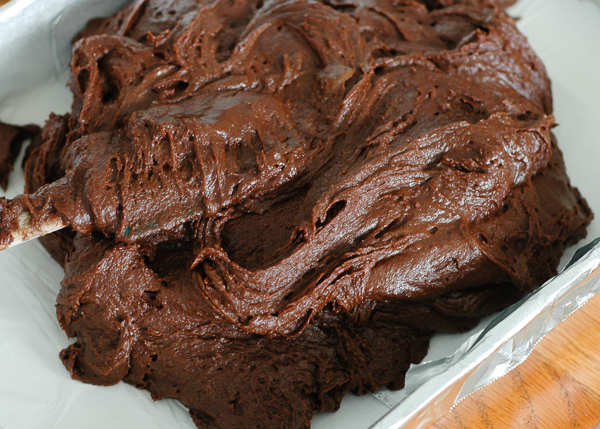 It’s so much easier to lift the brownies out of the pan and onto a cutting board than to try to get them out of the pan. I promise.

I actually recommend that you grease the pan and then grease the foil. TWICE.

The brownies will come off the foil so easily if you do.

**Bake the brownies all the way, then proceed. Don’t under-bake the brownies and top with the chips. Depending on your oven, they chips could burn. The residual heat from the hot brownies will be sufficient to melt the chocolate chips. 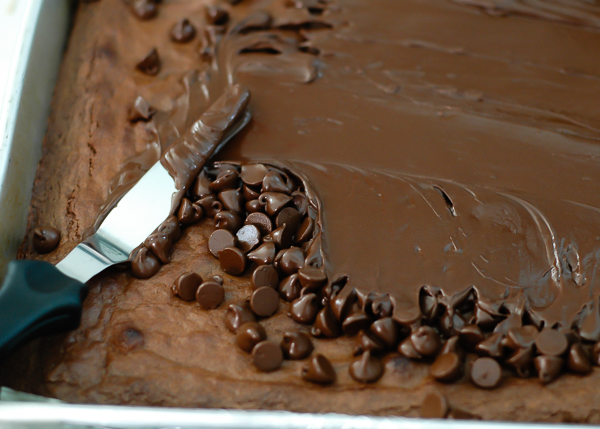 No need to put them back into the oven.

**As an another alternative, melt the chips in the microwave or double boiler and spread the melted chocolate on top of the brownies–cooled or hot. Then proceed.

**If you want the tops to look more like authentic peppermint bark, let the semi-sweet chips melt, cool the brownies (freeze them even), melt the white chocolate and spread it on top of the semi-sweet layer, top with the crushed candy canes, etc., etc.

**Make absolutely sure you place the brownies in the fridge to set up all the way. There is no way you will be able to cut through the peppermint bark layer and get the brownie off the foil unless they are cold. I freeze mine until they are very firm (not frozen), then cut, then go over the cuts again, and peel them off the foil. You can always put them back in the freezer or fridge if they get gooey or are sticking too much.

**To minimize broken peppermint bark on the corners, use a thin, sharp knife that you’ve dipped in hot water and dried.

**Remove the ends with a big knife for even cuts, and save the corners for yourself.

**Store them in the fridge (if they last that long…) and keep them well wrapped or in an airtight container. They will dry out otherwise. Also, you can expect the candy cane pieces to go a little sticky. They just will. No way around it.

**Lastly, at least I think this is the last thing–enjoy them!

If I’ve forgotten anything or if you have any more questions, please let me know. I want you all to make these because they are so darn yummy–even if they are a bit more finicky. 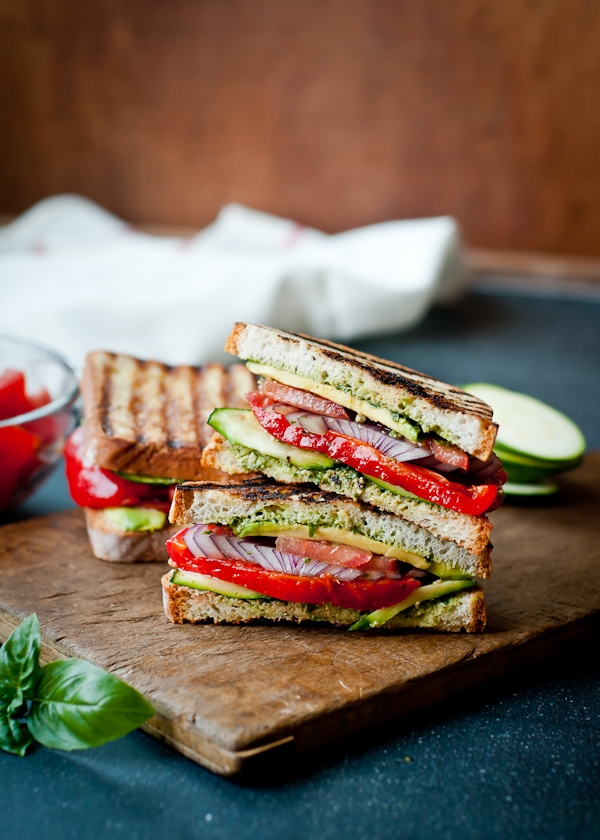 How To Add Meatless Meals Into Your Week

How To Make Croissants (With Step-By-Step Photos!) 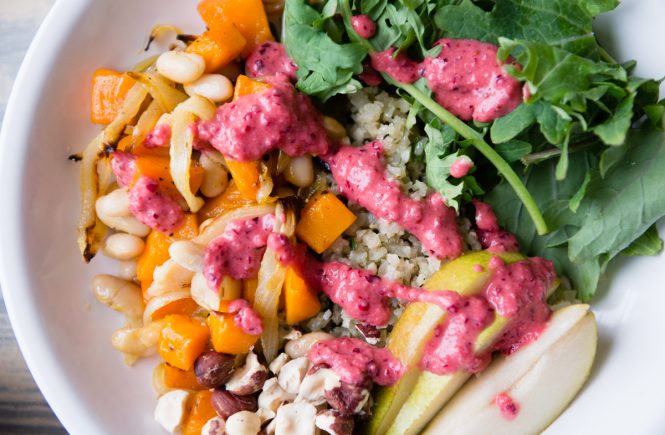