I’ve had a few e-mail requests for a peanut butter swirl recipe for ice cream.

And I thought to myself, “Yeah–why haven’t I done that yet?”

So, for my little guy’s second birthday, I decided to make him a peanut butter swirl ice cream cake. (Don’t get too excited–the cake was a disaster, despite how delicious it looks!) 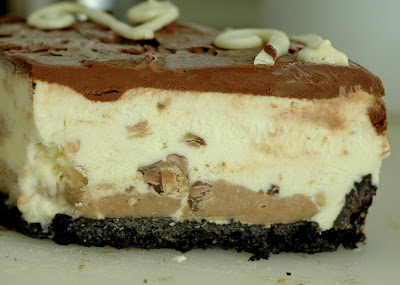 I did my research on different peanut butter swirl recipes. There are quite a few out there. I didn’t really love any of them.

Peanut butter can be hard to work with. When you mix it with other ingredients, like sugar, it gets super thick. I wanted to be careful of that and know that it would still freeze well, but not freeze solid.

I decided to go with natural peanut butter–mostly because I have ample amounts of it on hand at all times, and sweetened condensed milk.

Why sweetened condensed milk? Besides the fact that we love it, I was positive it would lend the kind of texture I wanted–like caramel. And it did.

It took on the desired caramel texture and was just sweet enough. I think Jif or Skippy might have been too sweet.

A full recipe makes a lot. My husband and kids ate the remaining PB swirl by the spoonful. Next time I make it, I will halve the recipe. But, if you want, I think making a full batch would be great because you could use the remainder as a peanut butter sauce. (Unless you need it for a 4 quart recipe–then you would double it.)

Start with a good recipe for ice cream–

Stir the peanut butter and condensed milk together, adding a little milk to thin it out. It should be the consistency similar to thick caramel sauce. (You can also beat it with an electric mixer.)

You will only need half of this recipe for a 1 1/2 quart ice cream recipe (like the ones above.) Double the recipe for 1 gallon (4 quart) recipes–for ice cream makers like the one grandma had.

To swirl into ice cream:

Let harden in the freezer before serving.

Dessert, How To, Ice Cream + Sorbets By Lindsey Johnson