Quinoa-Bulgur Pilaf with Corn and Jalapenos 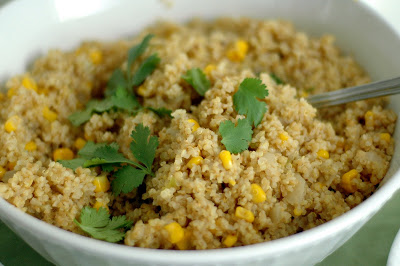 I personally love quinoa. It is a superfood. I also love bulgur. We don’t eat nearly enough of either.

The original recipe for this pilaf only calls for quinoa, but I realized too late I didn’t have enough. (Should have listened to that little voice in my head as I passed by the quinoa at Trader Joe’s the other day…)

You can use all quinoa with delicious results, or use some bulgur, like I did. Other changes I made to the recipe were simple–I used my cast-iron skillet instead of a pot, therefore requiring more liquid to be added. (Sort of like in risotto or my rice pilaf recipe.) I also substituted Serrano chilies for the jalapeños. 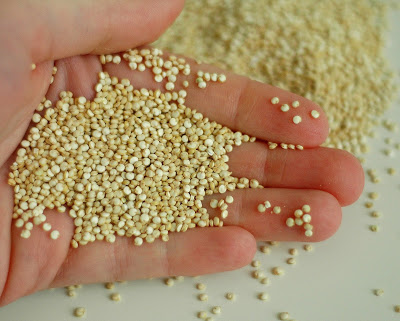 Instructions:
Heat 1 tsp. oil in a large skillet (or saucepan–remember to use less liquid!) over medium heat until shimmering. Add the corn and cook, stirring frequently, until corn starts to brown, about 5 minutes. Transfer corn to a bowl; set aside.

Add the onion, remaining teaspoon oil, and 1/2 tsp. salt to the skillet/saucepan. Cover and cook over medium-low heat, stirring occasionally, until the onion is softened, 8 to 10 minutes. Add the quinoa, increase the heat to medium, and cook, stirring frequently, until the quinoa lightly browns and becomes aromatic, about 5 minutes. Stir in the broth and jalapeños and bring to a boil. Reduce the heat to low, cover (I didn’t do this, hence the extra liquid needing to be added) and simmer until the quionoa is transparent and tender, 16 to 18 minutes. (Check it to make sure it’s not burning on the bottom or needs more broth or water.)

Remove the skillet/pot from the heat and lay a clean, folded kitchen towel underneath the lid. Let stand for 10 minutes, then fluff the quinoa with a fork. Stir in the cilantro, lime juice, and reserved corn and season with salt and pepper to taste. (You may not need much salt.)

Last time I made it, I used all quinoa and it was great. We ate it with sauteed shrimp, Tomatillo-Serrano chile sauce and lime wedges. 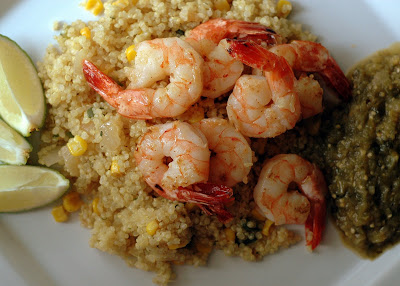