Do I really need to post a 101 about Mashed Potatoes? Probably not.

Everyone I know has their preferred method for mashing potatoes. I’m not going to say that one way is necessarily better than another. I can tell you the tips I’ve found to work according to our preferences. I subscribe to the “to each their own” philosophy of cooking. No hard feelings, okay?
_____________________________________

Over the last few years, I have been doing a lot of experimenting with cooking potatoes–not even just for mashing. As I have read magazines like Cooks’ Illustrated, cookbooks, and On Food and Cooking by Harold McGee, I’ve picked up a few helpful suggestions backed by science. (You know how much I love science in the kitchen! What? I know I’m a nerd.) 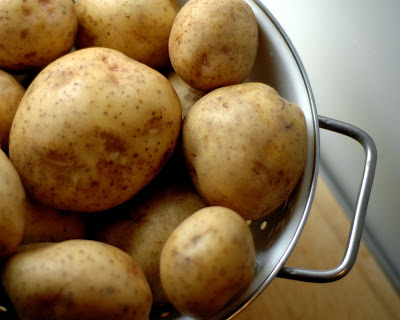 I start with about 2.5-3 lbs. of potatoes. I give them a quick rinse–not too worried about scrubbing because I’ll peel them later. It’s the same way my Grandma Maxie made her delicious mashed potatoes.

Aside #2–I happen to adore Yukon gold potatoes. They are my absolute fave. Other great taters for mashing–russet, Caribe, and purple. I also use all-purpose potatoes if Trader Joe’s is out of Yukon golds.

Aside #3–Coincidentally, yesterday after I wrote this, I saw this post over at Smitten Kitchen about fork-crushed purple potatoes.

Back to our regular programming–

Place the whole potatoes in a large pan and cover them completely with COLD water. 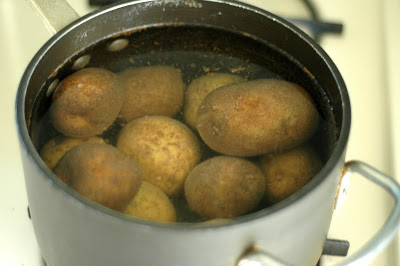 Now here is where I answer your burning questions–Why unpeeled? Why whole? Why cold water?

Unpeeled, whole potatoes are less likely to absorb too much water during the cooking process. It’s the starchiness of the potato that determines the final texture of the mashed potatoes. For this same reason, red or other waxy potatoes aren’t the best for mashing. They tend to get gluey. Waxy potatoes are better for potato salads and soups because they hold their shape after cooking.

Covering the potatoes in cold water ensures that they come up to temperature along with the water. Hence, the potatoes cook more evenly.

On Food and Cooking says this–

“Potatoes, winter squashes, and other starchy vegetables constitute a special case in the matter of cooking and texture. For them, alteration of the cell membranes and walls is less important than alteration of the starch granules. . .in raw tissue they are hard, closely packed agglomerations of starch molecules, and do not soften appreciably during cooking until the temperature reaches the “gelatinization range,” which in the potato is from 137 to 150 degrees F (58 to 66 degrees C). At this point, the granules begin to take up water, which disrupts their compact structure, and they swell to many time their original size. Once swollen, they are tender adn very easily damaged by physical pressure. In starchy vegetables, then, the primary task in cooking is to reach the gelatinization range in all parts of the tissue.” pg. 175 (Bold face added for emphasis.)

Also, don’t bother salting the water. It doesn’t matter at this point in time, in my opinion. 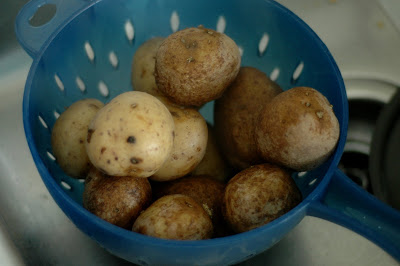 The potatoes need to simmer for a little longer when they are whole. I find this takes anywhere from 20 to 30 minutes, give or take. You will know the potatoes are cooked when a knife tip pierces through the skin and the center of the potato without resistance. You may even notice that the skins are “popping” a bit.

I dump them out into a strainer to cool a bit.

Depending on what I’m using the potatoes for, I peel them. The peel comes off nicely–sometimes in 2 or 3 strips. Watch out–those are some pretty hot potatoes! I keep a little dribble of cold water running while I finish peeling so I don’t get burned.

One thing–if you boil whole potatoes, it is nearly impossible to tell if a potato is rotten in the center. I always boil a few extra than I need just in case I lose a few to the garbage.

I like to use a good, old fashioned masher when I want them thick and chunky. And most of the time, I do like them chunky. When I want them to be a little smoother, I use my potato ricer.

Well, I’ll tell you my honest opinion, and it may cause a little controversy and spark some debate. (Which is totally fine–remember, to each their own.)

I used to use my hand mixer before I bought my awesome potato masher from IKEA.

When I used my mixer, my potatoes always turned out gluey–whether they were boiled whole and unpeeled, or peeled and cut into chunks. Beating the heck out of the potatoes can cause mashed potatoes to end up more like paste. This is because the starch granules that have become swollen after cooking (remember the gelatinized phase), release all that starch. Excess starch gives you glue. It’s that plain and simple. I think using a mixer can contribute to this.

I have noticed that gluey potatoes happen less with russets. However, I have also occasionally found that russets can become soupy and grainy. This is because there is a tendency to add more liquid than is needed.

I found this passage from From What’s Cooking America to support my theories and findings.

“Gluey or gooey mashed potatoes are caused by vigorous over mashing, as anyone who has tried to make the side dish in a food processor can attest. When potatoes are boiled, their starch granules swell. If those granules are broken too vigorously, the cells release copious quantities of starch, resulting in a potatoes with the consistency of wallpaper paste.

NEVER use a blender or food processor to make mashed potatoes. There are starch packets inside the potato cells and the blender blades rip right through them, releasing the starch and this makes the potatoes into library paste. The cells of the potato flesh contain a very fine starch. Mashing gently leaves most of the cells intact. Processing in a blender or a Food Processor acts like a cell homogenizer and releases all that starch into the liquid. Adding any liquid early just makes the process more efficient.”

**Now, if you are someone who has had success with using a mixer to make whipped potatoes, I’m not saying you have to stop. I just prefer my mashed potatoes thick and dense.**

Butter, milk, cream, and other additions:
What you add to the potatoes and when you add it is really important.

You can make “skinny” mashed potatoes with less butter and skim milk or chicken broth. They’ll be fine. But, if you really want them to be divine, add the butter.

Milk–how much and should it be hot or cold?

I start by adding minuscule amounts of milk. I haven’t found hot or cold matters that much. Obviously you warm up the milk if you want to serve warm potatoes. Cold is fine if you are using it for something else, say Shepherd’s Pie.

Sometimes I don’t add more than 1/2 cup of milk. Sometimes it’s as much as 1 cup+. Each crop of potatoes is different and will take different amounts of liquid, as will different varieties of potatoes.

Now for the good stuff–cream and “other additions.”

I wish my husband loved cream cheese in his potatoes. He doesn’t. (I know, it should have been one of those questions I asked when we were dating.)

I, however, LOVE cream cheese added in. I also like sour cream, or heavy cream. (Though not all at once.)

Adding in some extras instead of the milk will give you really great mashed potatoes. They will be creamier and richer than ever. (And I think Julia herself would agree.)

Other additions–cooked bacon, sharp cheddar or gruyere, fresh herbs, roasted garlic, etc. This list could go on. I’ve even seen recipes that call for cottage cheese.

Update 04.26.2013:  This recipes makes probably the best mashed potato recipe ever–potatoes are boiled in milk.  They turn out silky, rich, and are out-of-this-world delicious.

Reheating:
Anyone who has lots of leftovers after Thanksgiving knows that reheated mashed potatoes aren’t always so great. To that I say: add some butter or cream. And reheat them in the oven. Don’t dump them back into a pan. A microwave will work, too.

What I normally do is place the leftover potatoes in a casserole dish and dot the top with butter. I stick them in a 350 degree oven until they are warmed through–the amount of time will vary depending on the amount of potatoes.

Freezing is a great way to store leftover potatoes that you may not be using right away. I personally don’t like reheated, defrosted mashed potatoes. But, I would use them to make bread or soup.

Mashed potatoes stored in an airtight container in the fridge will keep for a few days. Not much longer. I think they lose their oomph and they can start to turn gray.

We’ve all bought bags of potatoes only to find out that half of them are green. What to do? Do you toss them? Do you cook them anyway?

Elise at Simply Recipes did a great job of covering this subject in her post “About Green Potatoes.”

As far as potatoes with ends that turn black after cooking, this is a simple problem that can easily be fixed. It is caused by “the reaction of ferric iron ions with phenolic substances in the tuber.” (On Food and Cooking, pg. 193) What does that mean? Not quite sure. Chemistry was not my best subject. But I do remember mixing certain compounds (quite a few with iron in them) and having them turn different colors–like black.

If this is a problem for you, some potato varieties darken more than others, On Food and Cooking suggests simply adding 1/2 tsp. cream of tartar for every 2 cups of cooking water after the potatoes are half done.

And with that I conclude your long course on Mashed Potatoes 101.

What did I leave out? Any comments or other suggestions?