Looking for a healthy, easy summer dinner? Look no further….

My husband introduced me to this recipe before we were married. His mother made it for him when he was growing up. And because we were so poor, we ate it often because it’s inexpensive, nutritious, and delicious. I know it’s summer once we start making batches of Summer Beans. (We also call them Greek Beans–maybe because of all the garlic?) 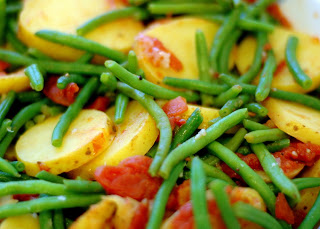 Ingredients:
Tomatoes–can use fresh (5-6 large tomatoes) or canned (2 small cans or 1 large)
4-5 Yukon Gold potatoes (or other waxy potato), sliced into 1/4″ rounds
1 bag frozen green beans (I like the Haricot Verts from Trader Joe’s)
3-4 cloves of garlic, minced or sliced (whatever you like)
Salt and pepper
Drizzle of good extra-virgin olive oil

Ingredients:Cook sliced potatoes, tomatoes, and garlic in a large pot until you can pierce the potatoes easily with the tip of a knife–so there is still some resistance, but the potatoes aren’t mushy.

Remove the potatoes and tomatoes to a large bowl.

My husband likes a splash of balsamic vinegar or Worcestershire sauce.
I like a sprinkling of freshly grated Parmesan cheese and red pepper flakes.

In My Kitchen: Flatware