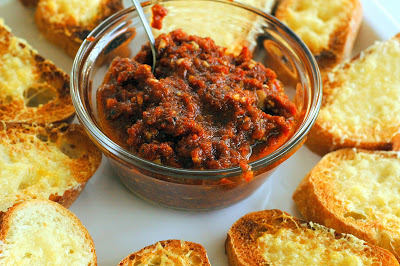 Awhile back I tried to replicate a yummy sun-dried tomato pesto that I had on Mother’s Day. What I came up with was pretty darn good. Finger-lickin’ good, to be exact. I made that pesto with sun-dried tomatoes that came loose in a package, as opposed to packed in olive oil. I soaked the sun-dried tomatoes to reconstitute them and then proceeded to make my pesto.

I inherited a gigantic jar of oil-packed sun-dried tomatoes when my good friend moved away last week. Of course, I had to make that pesto again. I mean, it’s been THREE WHOLE WEEKS since I licked the bowl clean from the last batch.

Making the pesto with the oil-packed tomatoes was far superior. The texture of the sauce was a little looser, but it was more than that. The tomatoes had retained their bright flavor and were sweeter–without the addition of sugar. The color was a deeper red due to some preservatives, which I tend not to like, but it didn’t really bother me in this application.

The verdict: making the pesto with sun-dried tomatoes packed in oil is not only acceptable, but much better than when using the reconstituted–which are also fine and tasty in their own right.

Washing Dishes (From an expert)