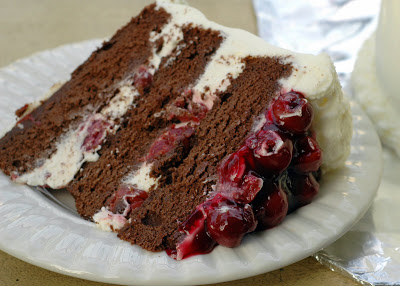 For Whipped Cream Frosting: (double this if you want to use some for piping/decorating)

For cake:
Preheat oven to 350 degrees F.  Grease and flour three, 8″ or 9″ round cake pans.  Line the bottom of each pan with waxed or parchment paper and grease the paper.  Set aside until ready to use.

In the bowl of a stand mixer, beat butter and brown sugar on medium-high speed until fluffy and light in color, about 5 minutes.  (Don’t skimp on this step.)

Chop the unsweetened chocolate. Measure out the cocoa. Add the boiling water, let sit for a few minutes, then whisk until smooth.

Sift the dry ingredients three times over a piece of waxed paper and set aside until ready to use.

After the creamed mixture is light and fluffy, scrape down the sides of the mixing bowl.

Crack eggs into a small bowl. Add them one at a time, beating well after each egg.  Add  vanilla and sour cream.  Beat to combine.

Turn off the mixer after the last addition and fold the rest of the flour in with a large silicone spatula, making sure to scrape all the way to the bottom of the bowl so no streaks of creamed or dry ingredients are visible.

Bake for 20 to 25 minutes or until the center of the cake springs back a little and a toothpick comes out clean.

Cool for about 10 minutes in the pan after you remove them from the oven. Loosen the sides with a thin knife so the cakes don’t crack as they cool.  Place the semi-cooled cakes on a baking rack to finish cooling.

For creamy filling:
Using an electric mixer, beat the cream cheese with the sugar. Slowly add the heavy cream and beat until thick.  Cover bowl with plastic wrap and refrigerate until ready to use.

For whipped cream frosting:
Place the powdered gelatin in a small microwave-safe cup.  Add the water.  Let stand for about 5 minutes to let gelatin bloom.  Heat the gelatin in the microwave for 30-60 seconds, checking every 15 seconds.  The gelatin will be clear and look syrupy.  Let cool for a few minutes.

In the meantime, beat the heavy cream with an electric mixer in a large bowl.  Add the sugar and continue beating until soft peaks form.  With the mixer running, pour the cooled gelatin in a steady stream into the whipped cream.  Beat until whipped cream forms peaks, but is not stiff.  (It will continue to stiffen up, so overbeat it.)  Chill it briefly until ready to use.  (This really should be done at the last minute as it sets up as it sits.)

For cherries and assembly:
Place one of the chocolate cake layers on a serving platter or cake plate.

Mix the reserved cherry juice with the almond extract and Kirsch, if using.  Use a pastry brush to soak the bottom layer of the cake with the juice.

Chill the cake for at least an hour before frosting and decorating.

Spread the entire cake with the whipped cream frosting.

If you want, you can thicken the remaining cherry juice with a cornstarch slurry (cornstarch mixed with cold water.)  Add the remaining half of the cherries and arrange the sauce on top of the cake.

I use gelatin to stabilize whipped cream whenever I am going to be using it to ice a cake or pipe onto a tart. I don’t use it when I dollop a dollop on my apple pie. It doesn’t need it.

Stabilizing the cream, does just what it says, it stabilizes it. It helps the cream to hold up against time and the elements–it lasts a little longer in the heat and in the fridge than normal whipped cream. It prevents the cream from weeping–water seeping out.

I start with a packet, 2 1/4 tsp. plain, unflavored gelatin, but I don’t always use all of it. The general rule I stick with is 1 tsp. gelatin per 2 cups heavy cream. 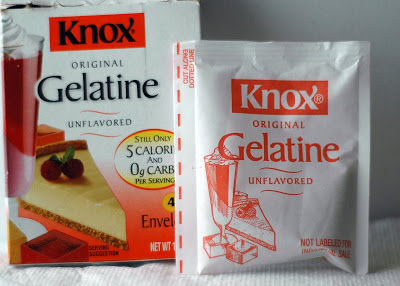 It looks sort of like Jell-o without the artificial colors and flavors, right? 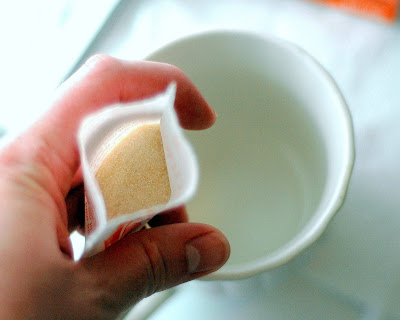 I place the 1 tsp. of gelatin in a small cup. 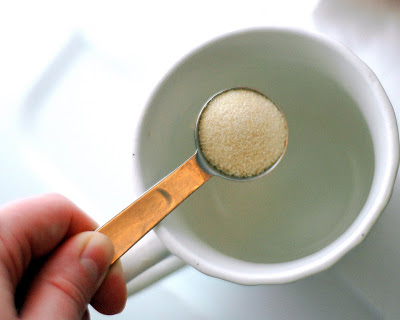 The gelatin and water need to sit for around 5 minutes–this is called blooming. In this stage, the gelatin granules absorb water and swell. 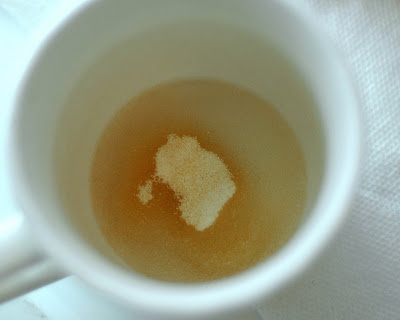 This is what it looks like after the 5 minutes. 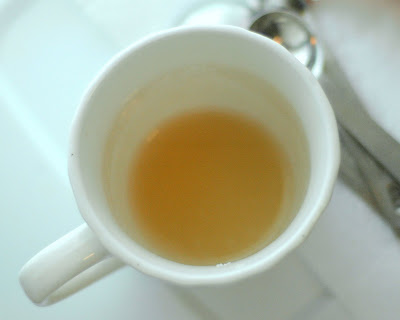 Now, at this point you can do one of two things.

1) Place the cup in the microwave for 30 to 60 seconds to melt the gelatin.

2) Place the cup in a pan filled with about an inch of water. Turn the heat to low and swirl the cup a little until the gelatin has melted and is totally dissolved.

If you use the microwave, be careful not to over do it. The gelatin melts very quickly. It sort of smells funny, too.

Let the gelatin cool a little bit. It will be “clear” not colorless. 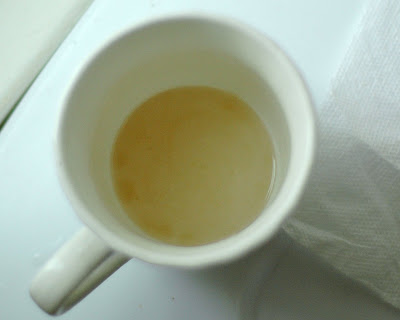 Start beating the cream. The cream should be ice cold. If you are sweetening it, add the sugar after it has started to thicken a bit. 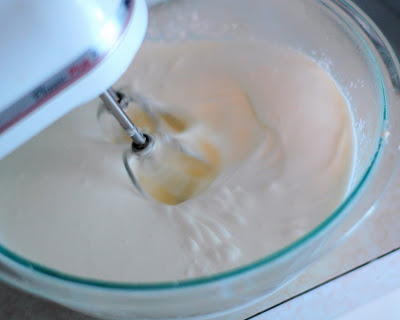 When it gets to this point below, you will add the melted gelatin in a slow stream. 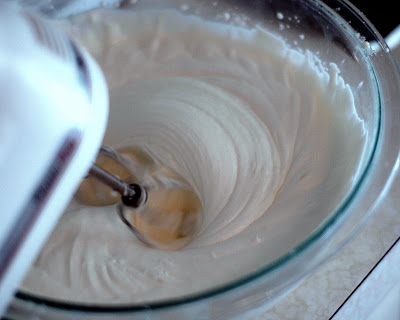 It won’t take long for it to really start to get thick. You want it to be stiff enough to spread. And you need to be a little quick about it once it’s done because the gelatin will start to set–not like Jell-o, but it will be a different texture than regular whipped cream.

This is a little too soft still: 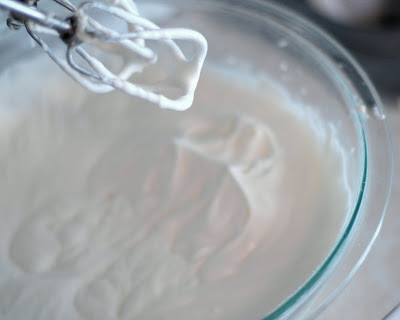 This is the point where I stop beating, even a little before would also be fine. 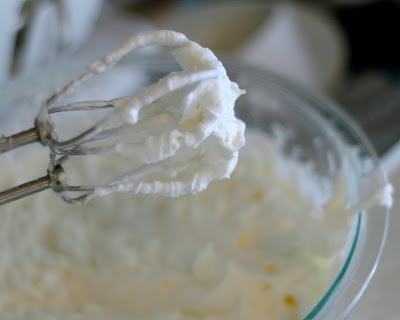 I am really into making creamy fillings–not just your regular icing. I make it ahead of time and let it chill while I am making the stabilized cream. You can also make enough cream to use as a filling, too. You could do a chocolate mousse and it would be great.

Beat the cream cheese and add a little powdered sugar to taste. Slowly add the heavy cream and beat until thick. 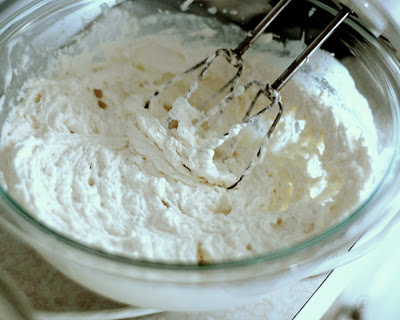 Prepare the cherries and cherry syrup:
I buy these big jars of Morello cherries from Germany at Trader Joe’s. Forgive me, I lost the photo–I’ve looked high and low. Oh, well. You could technically use 2 cans of cherry pie filling. But…..it’s so much better if you don’t.

This is about how much juice I get when I drain the cherries: 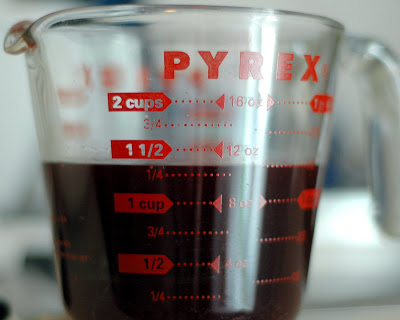 Now, if you are making this cake for a family affair that includes small children…

Then you probably don’t want to use Kirsch. A little almond extract will probably be fine. For this cake, I left it out because it was my little guy’s birthday cake and I knew we would be sharing with our neighbors, who also have children.

Normally we even remove some of the juice from the jar and replace it with enough Kirsch to submerge the cherries and let it sit for about a week in the fridge. And if you don’t think those cherries aren’t the most special little treat……they are. My religious beliefs keep me from drinking the Kirsch-spiked juice. (I have to throw this in for my fellow Mormon readers.) But it does make a mighty fine soaking syrup for those tasty cake layers…. 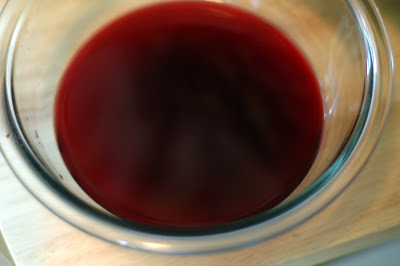 I use a pastry brush to soak the cake layers with the delicious juice. It also helps keep the cake moist, especially if you make it in advance and freeze it. 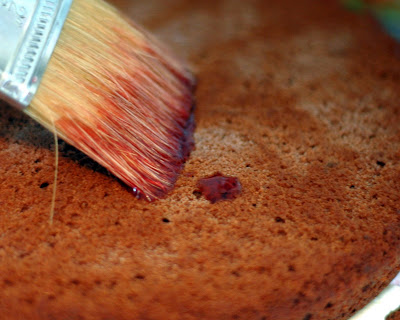 Whoa!! Technicolor cherries. The old Nikon didn’t pick up the red very well with these. They were just lovely though–deep red. 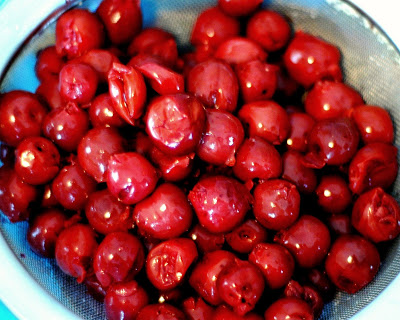 I spread the bottom layer of the cake with half the creamy filling and then arrange the cherries, as you see below. 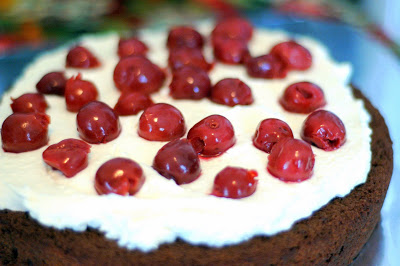 Repeat. Top with the final layer. Save the best looking cherries for the decoration. 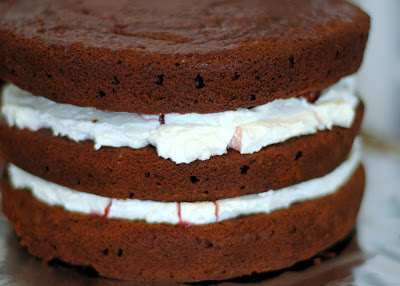 I usually chill the cake at this point–at least for an hour or so. Then the filling doesn’t ooze so much.

After it has chilled, I go forth as I do with all my cakes. I do a thin crumb coating, chill again for a bit, frost the cake. 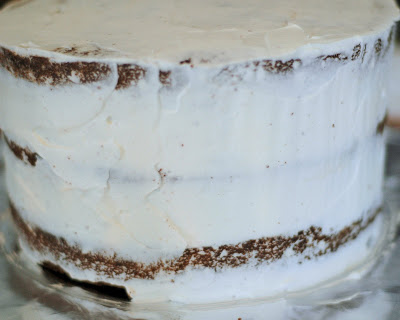 To finish:I usually save a bit of the cream for piping. Make a little extra stabilized cream so you have plenty. (P.S. I would even make a separate batch. I waited too long to pipe this cream and it had set too much. So I re-whipped it. It broke and started to weep….it was still okay. I saved it, but next time I will just do a separate batch just for piping.)

I thickened the remaining juice that I didn’t use to soak the cake layers. I like to use a little cornstarch mixed with cold water. I let the mixture come to a boil and cook for about 1 minute. Then I turn off the heat. Add the whole cherries. Pour it into a bowl and let it chill until cold. Be careful not to use too much cornstarch or it will end up jiggly like Jell-o. You might even start crying…not that I’ve done that before or anything. If it does happen, just put it back into the pan, heat it up and add a little more water. Then chill it again.

I like to pipe the cream around the bottom perimeter first, then the top, although that is personal preference. I used a large star tip. Then I carefully spooned the cherries into the center of the cake.

Chill it until ready to serve. 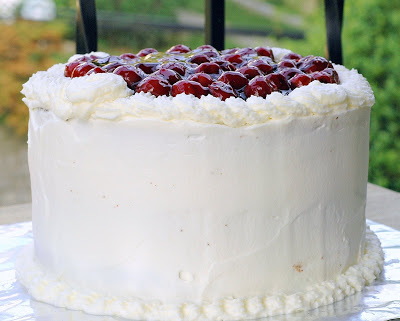 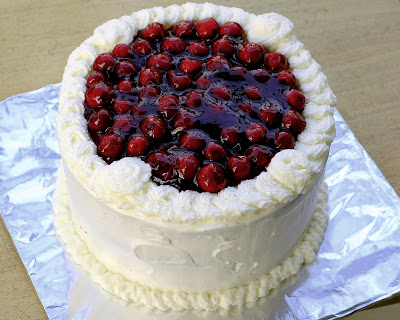 Mmm. The cake is velvety. The cream is, well, creamy. The cherries help cut the richness and fat. You should keep the milk nearby, or at least serve it with a large scoop of ice cream. We liked Almond Cheesecake Ice Cream that particular day…
ENJOY!!