How To: Slow Cooker Black Beans 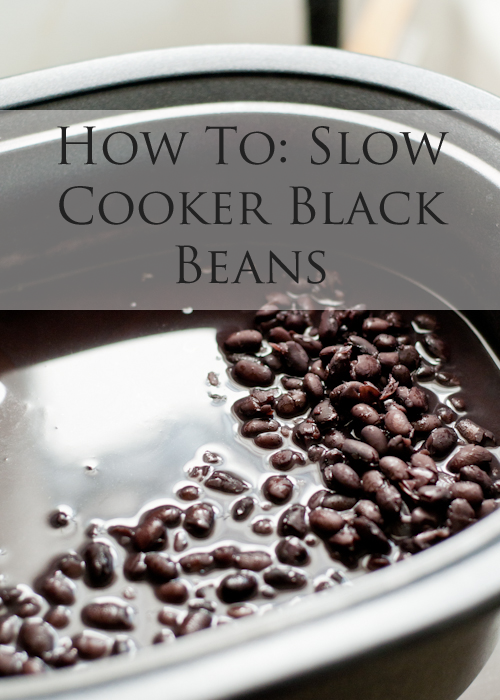 I’ve been told I make the best slow cooker black beans ever, but I can’t take all the credit. When we were still dating, my husband taught me how his family made Brazilian-style black beans when he was growing up.  His aunt showed me how to make black beans in the slow cooker.  Before that, I thought beans had to cook them in a pressure cooker to get them soft like the canned beans we bought.  (I still remember trying to chew on the crunchy beans we’d try to cook at my house when I was growing up! Ha!)

Over the past 16+ years, I’ve perfected it.  (High five!)  It’s not too difficult, but because I make slow cooker black beans about once a week or so, it was important for me to get it right and I had ample opportunity for practice.  We eat them throughout the week either as a side on top of rice, in soup, or one of my favorite ways, mixed with quinoa and salsa for breakfast.

There are a few secrets to making awesome slow cooker black beans, and it applies to other types of beans and legumes too.

The difference between the beans I make and other recipes is that I rely heavily on aromatics to flavor the beans as they cook.  It truly does make all the difference. 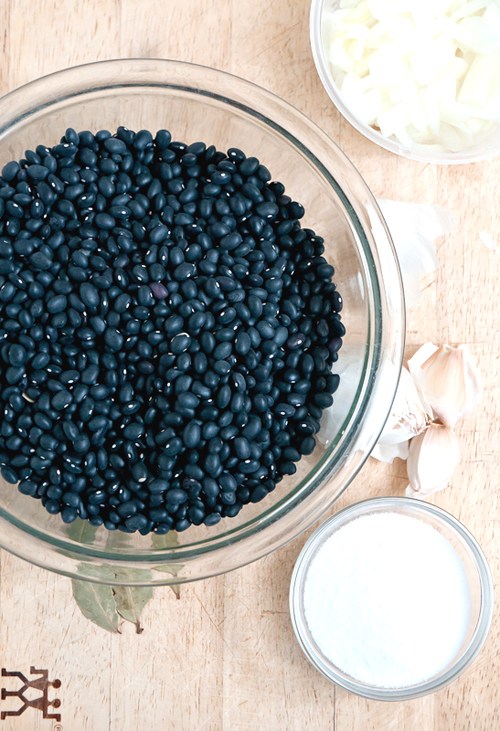 The aromatics I use:

In the comments below, you can read what other readers have added to make the recipe their own. Totally add cumin, oregano, paprika, chili powder, or other chopped veggies like celery, chilies or bell peppers. I prefer to make a large plain batch of beans and add those other spices and ingredients when I’m making a recipe with the cooked beans. I think of them and use them the same way I do canned beans. But by all means, spice it up!

One of the best things we do is add a ham bone to the pot. (Yes, there’s salt in that, but it hasn’t made too much of a difference like adding plain salt has.) It becomes the base of Brazilian feijoada (black bean and meat stew) to which we add other meats and sausages.

But, what if you add salt to beans at the beginning of the cooking time?! 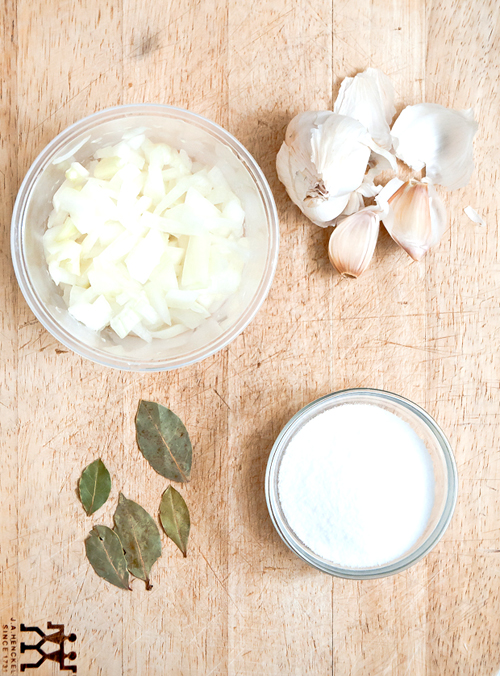 Do Beans Have to Be Washed Before Cooking?

Yes! It’s VERY important to sort the dried beans and give them a good rinse before before cooking them. 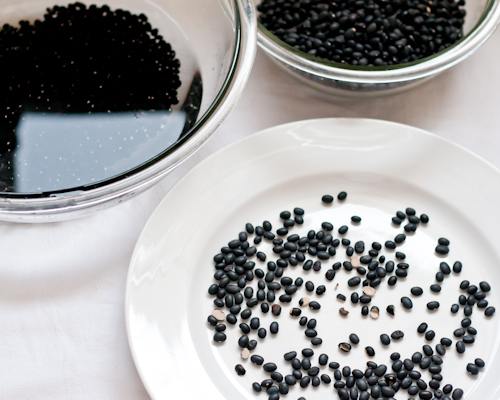 Before you rinse the beans, sort out any small stones, broken, wrinkled, or otherwise misshaped beans.

I will place the dry beans into a large bowl or on a large plate and go through them. I find that black beans are more notorious for stones than other varieties of beans; probably because they are smaller. Dried beans aren’t usually washed before they are packaged up. I’ve bought dried beans from a local farmer’s market that were covered in dust from the field, tons of small rocks, and even bits of grass, weeds, or grain. I don’t like eating dirt…I don’t know about you! 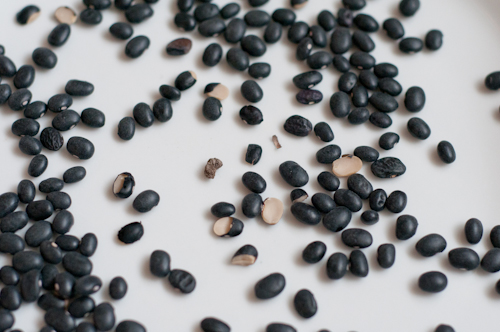 To rinse the beans, you can do one of two things: 1) place them in a large colander (with small holes) or a fine-mesh sieve and rinse under running water, or 2) my preferred way, place the sorted beans in a large bowl of cool water. Agitate the beans with your hands to loosen any dirt, drain through a sieve or colander; repeat until the dirt is gone. The black beans will color the water, so it won’t ever “run clear.” But you should be able to see that there is no longer dirt at the bottom of the bowl.

Do You Have To Soak Beans Before Cooking? What About Boiling Beans First?

Ah, the most frequently asked question! I used to think you HAD to soak beans before cooking until I didn’t one time and they cooked in the same amount of time as when I soaked them. This got me to thinking that it probably wasn’t an issue when using a slow cooker. I’m not sure how much it cuts down on cooking time on the stovetop.

Soaking is thought to help remove anti-nutrients or the extra starches that can cause gas and bloating commonly associated with beans. Personally, I don’t believe soaking them makes them all that more digestible, nor do I believe the part of anti-nutrients. Eating beans often will help your body become accustomed to the fiber and starches in the beans and you’ll probably end up with less gas and bloating.

This advice (remember I’m not an expert per se), does not pertain to kidney beans. They should be boiled first in water, drained and rinsed, then placed in the slow cooker with fresh water. I’ve never been sick from eating beans that weren’t soaked or boiled, but some may have more sensitivities than I do.

My advice: Do what you think is best for YOU and your family. The slow cooker I use is a high end one and I know that it heats properly and cooks at a high enough temperature. I also use HIGH rather than LOW most often. Like I said, we have never been sick from a pot of beans – not even once. I’ve cooked hundreds of batches of slow cooker beans with no problem at all.

Read this article from LaTimes.com for more info.

That being said, please read the comments below and inform yourself based on the experiences of others.

Now We Put The Beans, Water, and Aromatics in the Slow Cooker

Everything goes into the slow cooker, except the salt, and is covered with water.

My slow cooker is very large (affiliate link), so I can make 2 pounds or more at a time.  I use around 6 cups of water for each pound of beans.  That is more than enough water. It may seem like too much water, but if too little water is added, the beans might absorb what water there is and burn.  (This may or may not have happened to me a few times.) 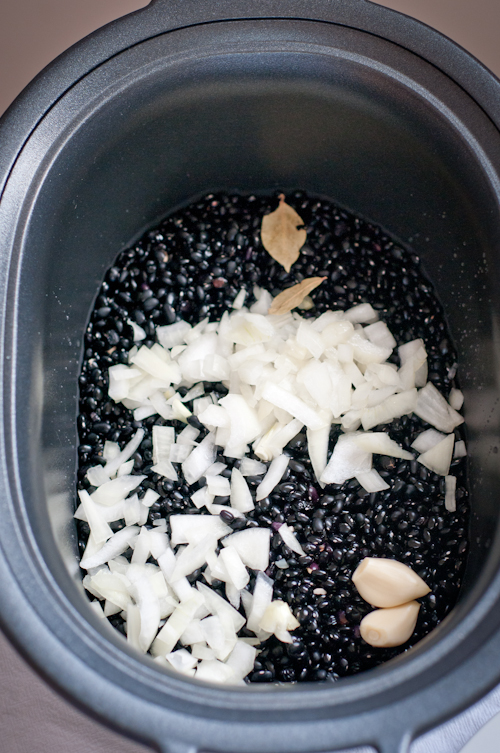 How Long Do You Cook Slow Cooker Beans? 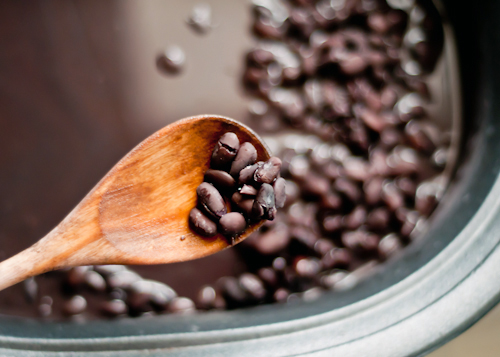 When Do You Add the Salt to Slow Cooker Black Beans?

About 30 minutes before the end of the cooking time, remove the lid of the slow cooker and remove a few beans with a spoon and blow on them.  If the skins peel back, the beans are done.  They may still be a little firm. Taste one to be sure. If it’s still a little crunchy, the beans need more time. Another hour on HIGH, or a few hours on LOW.

How Much Salt Do You Add To Beans?

I use 1 TABLESPOON per 1 POUND of dry beans. That sounds like a lot of salt, I know! But that salt will absorb into the beans and be just the right amount. Now, if you are on a salt restricted diet, of course you can omit the salt completely or use less. We’ve found we like the 1 Tablespoon per pound and that the beans are well-seasoned and ready to eat or use in a recipe.

After stirring in the salt, replace the lid and let them continue cooking for the additional 30 minutes, or longer. If the beans cooked more quickly, I will remove the insert, add the salt and put the lid back and let the beans absorb the salt off the heat. 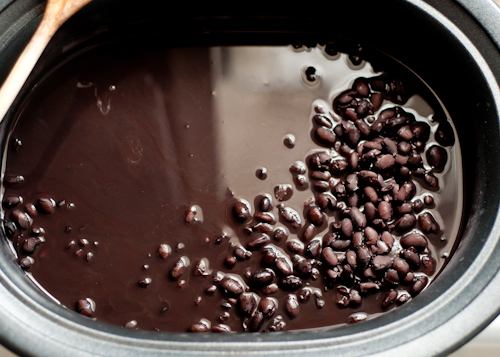 The beauty of making a big batch of slow cooker beans is that you can use some now and save some for later.

After cooking the beans and seasoning them, I let them cool completely before transferring to containers or resealable freezer bags for storage.

The beans freeze very well separated into quart or gallon-sized bags. Freezing them in flat layers helps with both storage and thawing. They stack nicely and are easy to slip into a bowl of warm water when you’re ready to use them.

The slow cooker black beans will keep for about a week in an airtight container in the fridge. They will keep several months in a normal freezer, or even up to a year in a deep freeze.

How Many Cups Does One Pound of Dry Beans Equal?

One pound of dry beans yields about 5 cups of beans (minus the liquid), which is the equivalent of about 3 (15-ounce) cans of beans, give or take.

These are some of my very favorite recipes that I make over and over again using slow cooker black beans:

Troubleshooting: My Slow Cooker Black Beans Aren’t Soft! What Did I Do Wrong?!

First thing, take a deep breath and before you leave a nasty comment, a few things: 1) it’s not the recipe. I’ve literally made this hundreds of times successfully, as have numerous readers and friends. 2) it’s probably not you! I’ll explain more below.

The Best Chicken Sandwich in the Entire World 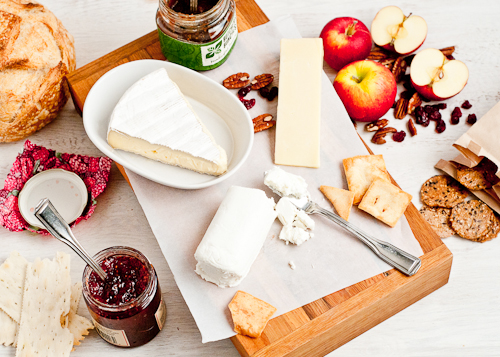 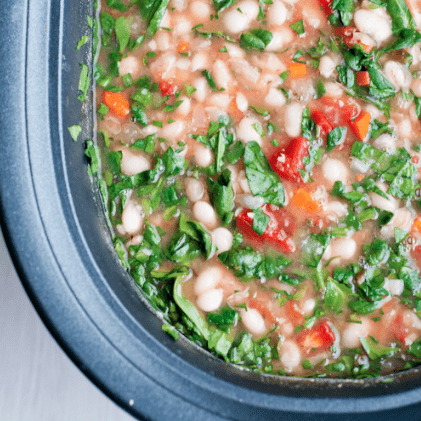