I finally figured out what to do with my two blood oranges! Why not make cupcakes? I sort of threw this recipe together from a couple of recipes I like to use. The cupcakes are super moist. You can use your favorite cupcake recipe and just add some zest. I’ll be honest, the cupcakes turned a little green from the blood orange juice. They tasted great though.

I’ll let you in on a little discovery I made… 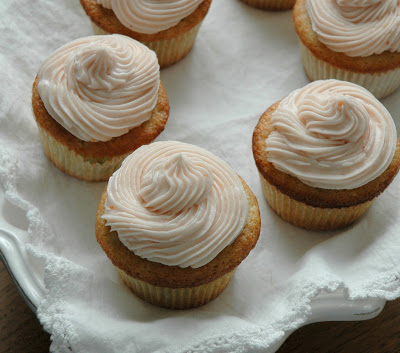 Meringue buttercream icing can be tricky to make–especially if you are in a rush or don’t have a lot of experience with making it. I was looking at a jar of marshmallow cream I bought to make fudge for Christmas. (I never got around to it!) The ingredients are basically the same as a meringue–with the exception of corn syrup. A light bulb went off.

What if I used it to make buttercream?

I tried it and it worked beautifully. Even more, it’s a lot more stable than the traditional buttercream I usually make–not necessarily better, but an adequate substitution. The recipe is below. 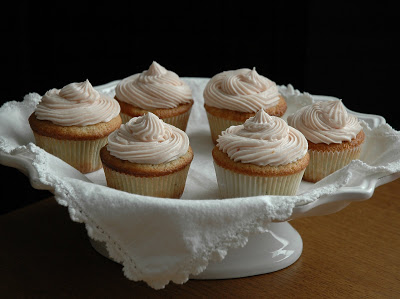 Sift dry ingredients and set aside.

Using a stand mixer with a paddle attachment, beat butter, sugar, and zest until light and fluffy, scraping down the sides of the mixing bowl as needed.

Add the eggs one at a time, beating well between each addition. Add the extracts, beat well.

Starting and ending with the dry ingredients, add the flour and sour cream alternately, mixing just until the flour disappears into the batter. Add the orange juice and mix well.

Remove the bowl from the mixer. Scrape the sides and bottom of the bowl to make sure all the ingredients are incorporated.

Fill each lined cup 2/3 full with batter. (You may end up with enough batter for a few extra cupcakes.) Bake for about 20 minutes. The cupcakes will be golden brown, and will stay flat on top. Test with a toothpick inserted into the center.

Remove the cupcakes from the pan while hot and place on a wire rack to cool.  Top each cupcake with a little of the buttercream and eat.  (I put mine into a piping bag fitted with a tip to make the swirly tops.)

Place the marshmallow cream in the bowl of a stand mixer and turn on medium speed. While mixer is running, add the butter a tablespoon at a time into the bowl. Beat until incorporated and fluffy. Add the zest and juice. Continue beating until the buttercream comes back together–it may separate or look curdled.

Use immediately or store in the fridge for up to 1 week. (The icing will also freeze well in an airtight container, being careful to keep it protected from strong odors like garlic and onion.)