I have to preface this recipe by saying that it was one that I sort of, maybe, kinda made up along the way. And to be down right honest…..that’s how I cook most of the time. Glad I finally got that out in the open. That’s why there are more dessert recipes than anything else in my archives–those recipes require strict adherence to the directions. 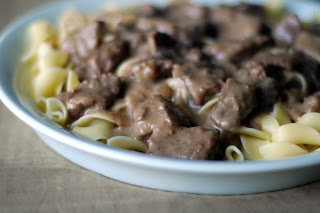 Beef Stroganoff is a comfort food for me. Growing up my mom made it with ground beef and condensed cream of mushroom soup. I can’t eat that anymore, I’m afraid. (Sorry, Mom.)

And, while I’m at it, I also like to add a healthy amount of red wine because I can’t imagine stroganoff without it. If you are worried about the amount of alcohol, it cooks for such a long time that it really dissipates. But, you can leave it out and use beef broth instead.

Instructions:
In a large skillet, heat 1 Tbsp. butter and add the onion. Cook until softened. Remove onions to slow cooker.

Meanwhile, place flour and salt and pepper in a mixing bowl. Add the meat and toss to coat.

Working in batches, add half the remaining butter to the hot skillet and brown half the floured meat.

Once all the meat has browned, add it to the slow cooker along with the mushrooms and mustard (if using). Add the wine. Cook for 8-10 hours on low heat. Before serving add 1 cup sour cream and dill, if using.

Let’s begin with an onion: 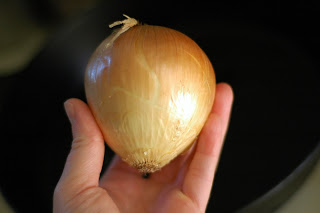 Chop it and saute it in a little bit of butter. (Notice the cast iron skillet–which reminds me that I need to devote a post to cast iron. Inexpensive and awesome.) I didn’t even bother to preheat my skillet first. That’s how lazy I get sometimes. 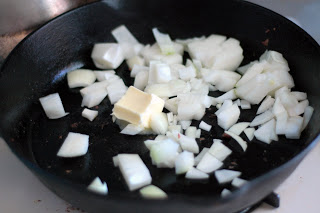 I like to use a good, cheap stew meat. With slow cooker recipes, you can use the tough, inexpensive cuts because they can withstand the long hours and get unbelievable tender in the process. (But, you probably already knew that.)

I bought a family size package–about 2 lbs. or so. Toss it in flour seasoned with salt and pepper. 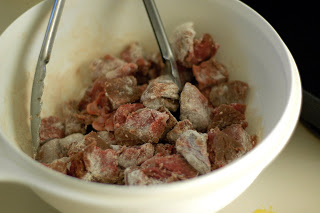 After the onions are nice and soft, remove them from the pan and add a little more butter, maybe 1 Tbsp. or so. Let that get bubbly and add half the meat. Unless you have a really huge skillet, you will need to brown the meat in batches, or you will end up with a gooey mess. The meat won’t brown one little bit; it will steam. 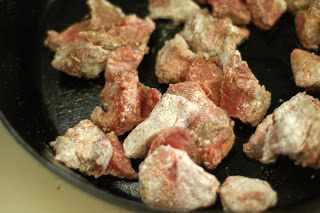 See? Getting nice and brown… 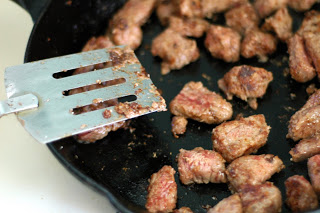 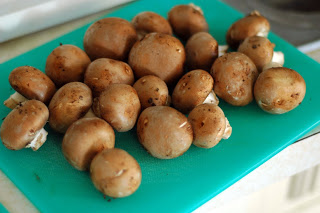 I don’t love mushrooms. I love the flavor they impart, but I sort of have these weird texture issues once they are cooked. But, cremini mushrooms (immature portabella/portobello mushrooms) don’t bother me quite so much, so that is what I used. Feel free to use whatever your heart desires. While I’m on the subject–portobellos are also very nice to use in a stroganoff, but remove the ribs or the stroganoff will take on a dark, unattractive hue. Really, for any vegetarians or those who don’t eat red meat, portobellos would be a great substitute for all the meat in this recipe. 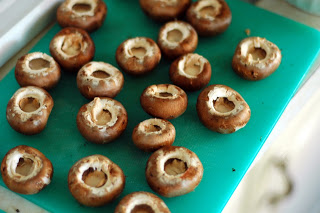 If using creminis, gently brush any dirt from the caps and remove the stems. I used about a pint of mushrooms. It ended up being about equal parts beef and mushrooms. 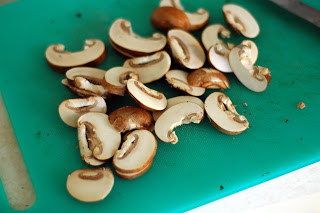 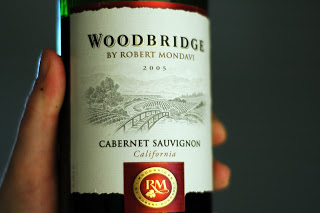 I don’t drink alcohol for religious reasons, so I rely on the guy who runs my local liquor store to lead me in the right direction. Typically the rule of thumb is that if you wouldn’t drink it, you wouldn’t want to cook with it.

He suggested this Cabernet Sauvignon as a good cooking wine. (Please don’t use the kind from the supermarket. I beg you. It may be cheaper, but you get what you pay for.) This bottle was pretty inexpensive–about $6.00.

I’m still new to the world of slow cookers. I like my slow cooker a lot. It’s a 4-qt. oval CrockPot by Rival.

I just added everything to the cooker and poured about a cup of wine over the top. 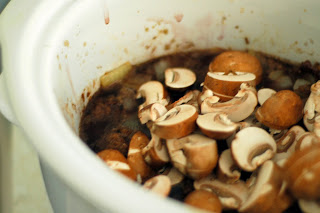 Then add some sour cream. I didn’t measure an exact amount, but I’m guessing it was around 1 cup or so.

Other optional things you can add–a little fresh dill and/or 1 tsp. Dijon mustard. If using the dill, add it near the end of cooking. The mustard can go in earlier.

Serve the stroganoff over hot, buttered egg noodles or rice. 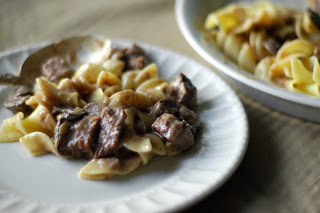 This recipe makes enough to feed 4-6 people as a main dish. 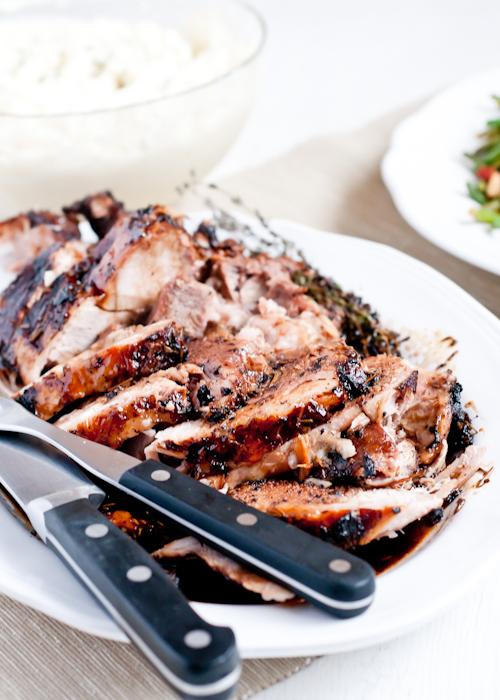 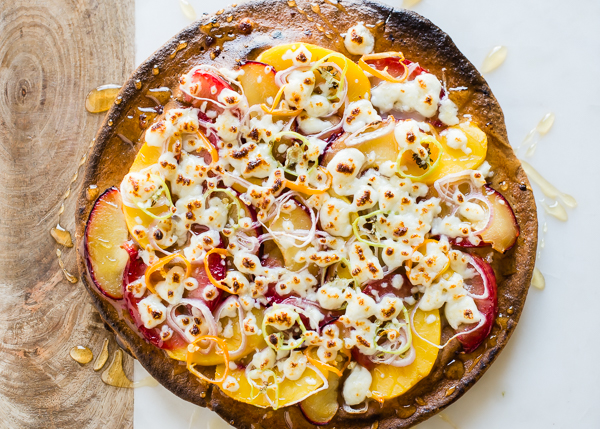 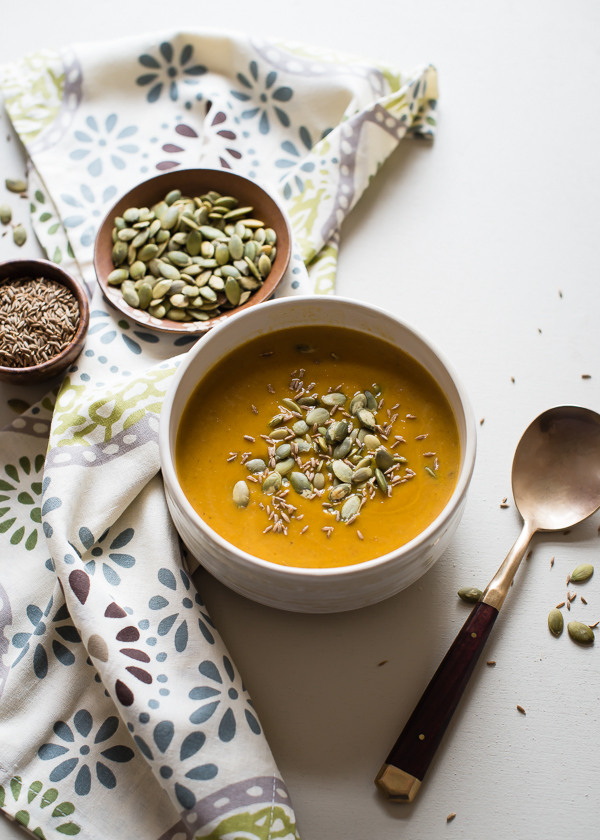