This is my favorite sauce–hands down. I love it. I have very tender memories of tasting this the first time. It left such an impression on me that I have been making it regularly ever since I tracked down the recipe in one of my favorite cookbooks, Rick Bayless’s Mexican Kitchen, a gift for my first Valentine’s Day as a married woman.

Here we have the yummiest sauce: Simmered Tomatillo-Serrano Chile Sauce 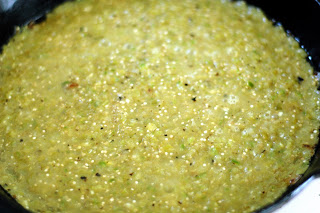 The key players we have for the sauce are: 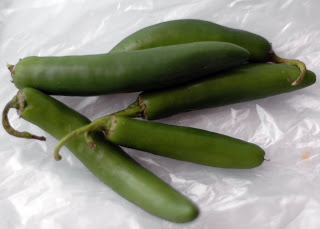 Tomatillos: (aka tomate verde) tangy, very seedy, look like green tomatoes, need to be husked and rinsed well before using, can be used raw or cooked, come canned as well.

This is what you will probably see when you look for them at the store. I buy mine at a local Latin American market–they are cheaper and I know they are bought frequently by patrons and therefore maybe more fresh than at the regular supermarket. 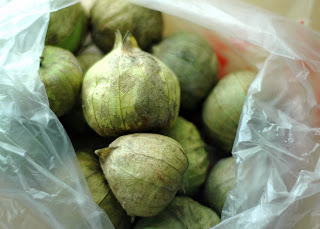 You just have to peel back the husk and rinse off the sticky residue. When you are buying tomatillos, look for golf ball-sized ones that are firm to the touch. Peel back the husk a little to check for rotten areas or spiders. Spiders happen….sometimes.

You can also see all the seeds in there, too. 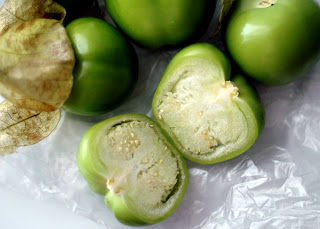 For this recipe you will need the following:

Place the tomatillos and the chiles in a food processor and pulse until they are broken up, but not pureed. In a large pan over medium-high heat, cook the onion and garlic in a small amount of canola oil until soft. Add to the food processor. Pulse until everything is uniform and almost smooth. Wipe out the pan and add a little more canola oil.

This time making the sauce, I started with them in the skillet: 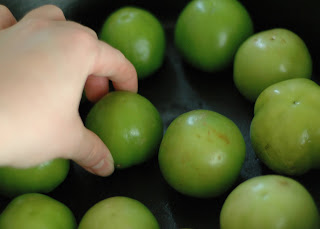 Then I transfered them to the tiny toaster oven to finish broiling. You have to figure out what works best for you–you can even boil these to soften them. Or use 2 large cans of tomatillos.

They got a little brown on the stove–it was way too hot to turn on my regular oven. 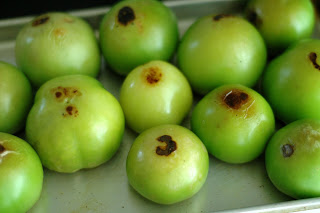 I left them in my tiny toaster oven for about 5 minutes per side. I got them out and turn them over half way through. Basically you just want them to look like the picture below. The roasting brings out a great flavor and tones down the harshness of the acid a bit, in my opinion.

You can see how the skin blistered and blackened a little, too. That’s good. You want that black stuff on those babies. 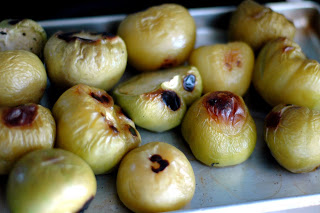 Now we move on to the serrano chiles.

They get roasted/toasted, too. Use a dry skillet and brown them on both sides–cook them until the skin gets black and blisters. They will also get a bit softer. The smell will be good, too. 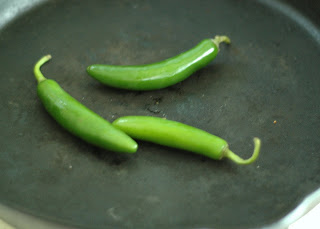 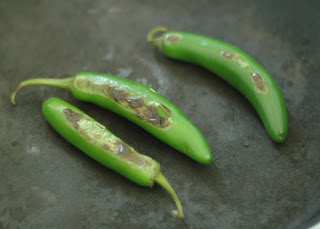 After the serranos are finished, you will want to cut off the stems and seed them, or your sauce will be very spicy. If you like spicy, then by all means leave them in. 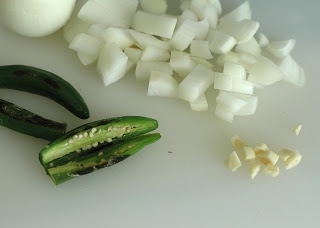 Heat a skillet over high heat and add a couple of tablespoons of oil. When the oil is hot, add the roughly chopped onion. 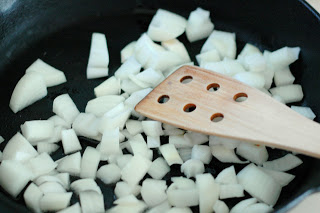 Cook the onion until it becomes golden brown and softens. This usually takes about 10 minutes. Add the garlic and cook for a few more minutes until the garlic is soft. 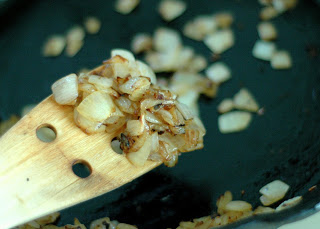 Place the tomatillos and serranos in the bowl of a food processor or blender. 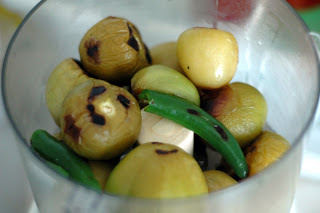 Process until it forms a rough looking puree. Then add the caramelized onions. 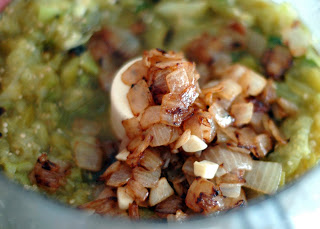 Begin pulsing. You don’t want this to be a totally smooth puree ala baby food. You want a little texture. The picture below is at the half way point. 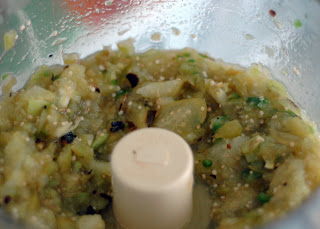 This is what you want it to look like: 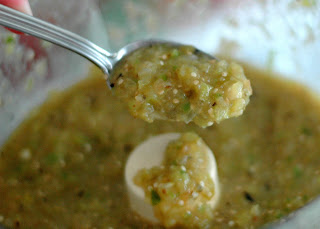 The best part is yet to come. The sauce is not finished!!!

Wipe out that skillet you used to brown the onions. Add a few more tablespoons of oil. When it’s hot–test it with a drop of the puree, when it sizzles, it’s ready.

Fry the puree until it thickens and darkens. It will start smelling pretty good. 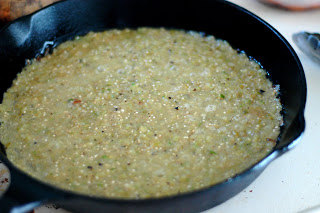 It’s starting to get a little thicker at this point, but it needs more time. 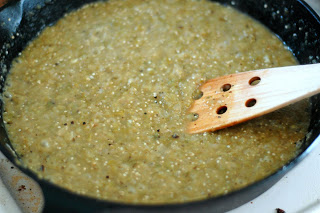 You eventually want it to be a thick paste. The color will have changed a little, too. 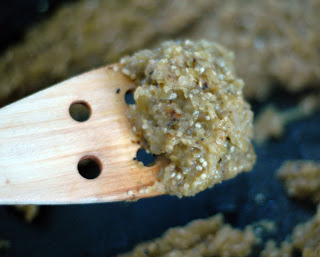 At this point, you will add the 2 cups of chicken broth. Stir well and bring to a simmer. 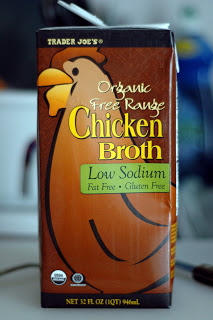 The sauce is finished when it coats the back of a spoon. 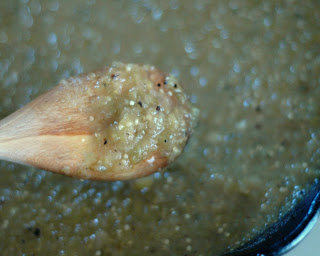 Add the cilantro right before serving.

This sauce is very freezable. If you freeze it, Rick Bayless recommends you let it thaw and put it back in the food processor/blender to help it come back to the right consistency.

I enjoy this sauce plain from the spoon, or in several other recipes.